Last updated on December 12, 2020 By Liana Green Leave a Comment

British food is entwined in history. Over the centuries our cuisine has been influenced by many different locations and cultures. Home cooking is as popular as it ever was, with some classic British recipes standing the test of time and remaining as popular as ever!

Whether you are a visitor to Britain, or you live here, I hope you enjoy my list of what I consider to be classic British recipes – the list is by no means exhaustive – there are so many I had to sadly leave off – maybe there will be a part 2 at some point! 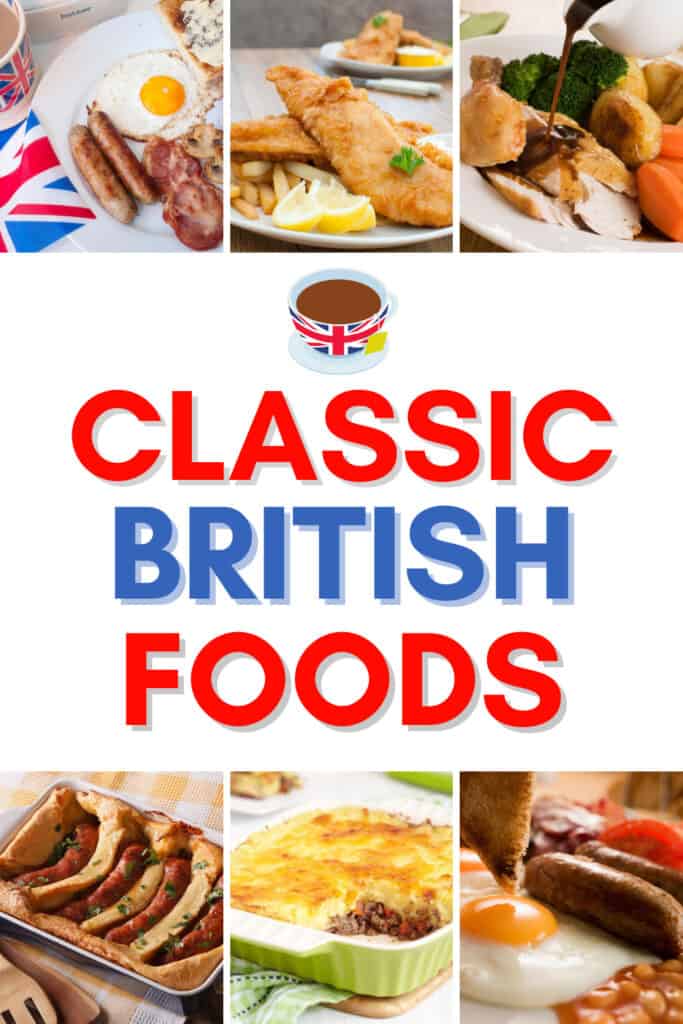 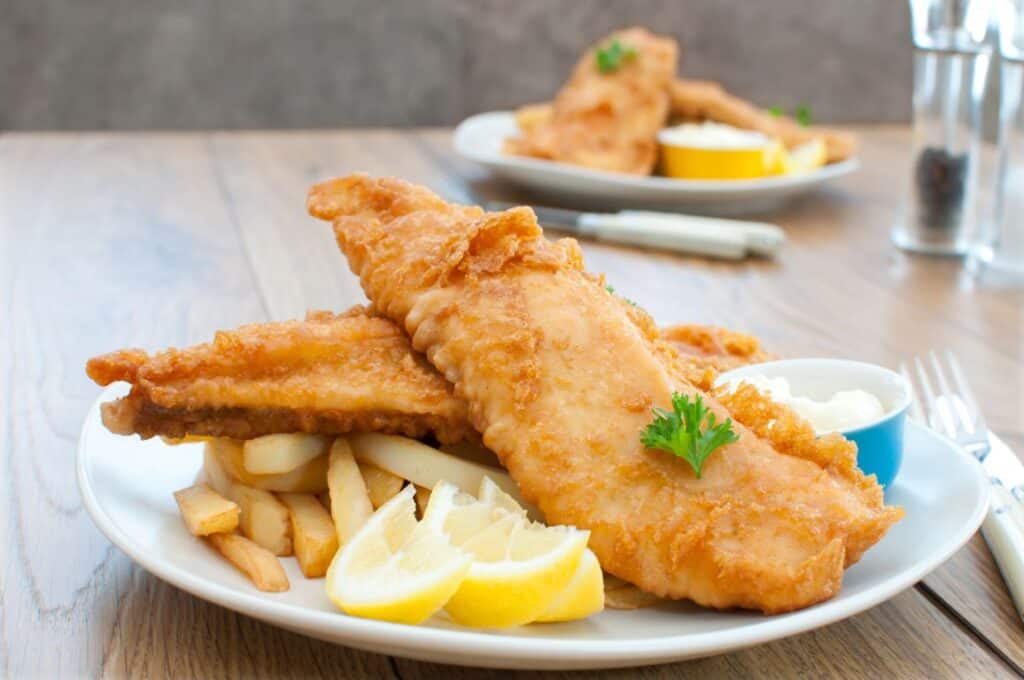 Probably the dish that comes to most people’s minds when asked to name a famous British meal.

Of course you can also skip the takeaway and make it at home – although there is something quite nostalgic and special about heading to the local chippy on a Friday night for your tea and soaking in that delicious smell that greets you as you head through the fish and chip door.

To make it authentically at home you will need to use a deep fat fryer, or a large saucepan full of heated oil to fry both the chips and battered fish. If you want to make fish and chips at home without all the oil, you can also make a healthier alternative in an air fryer.

Mushy peas (see #2!) are often served with fish and chips, as is chip shop curry sauce. 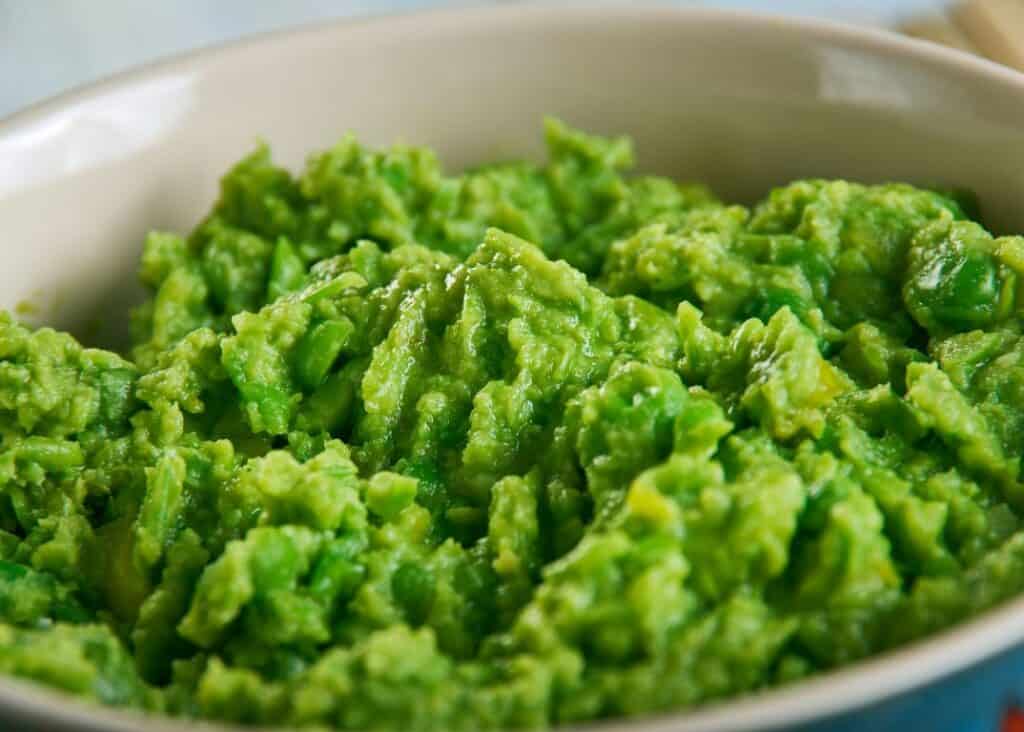 Mushy peas are a popular side dish to fish and chips, originating in northern England but enjoyed all over the country.

Traditionally they are made by soaking dried marrowfat peas overnight before boiling, simmering, mashing them and finally stirring in some butter and cream before serving.

If you don’t have, or can’t get hold of marrowfat peas, you can use frozen peas – boil them according to packet instructions, then mash them before adding butter and cream. 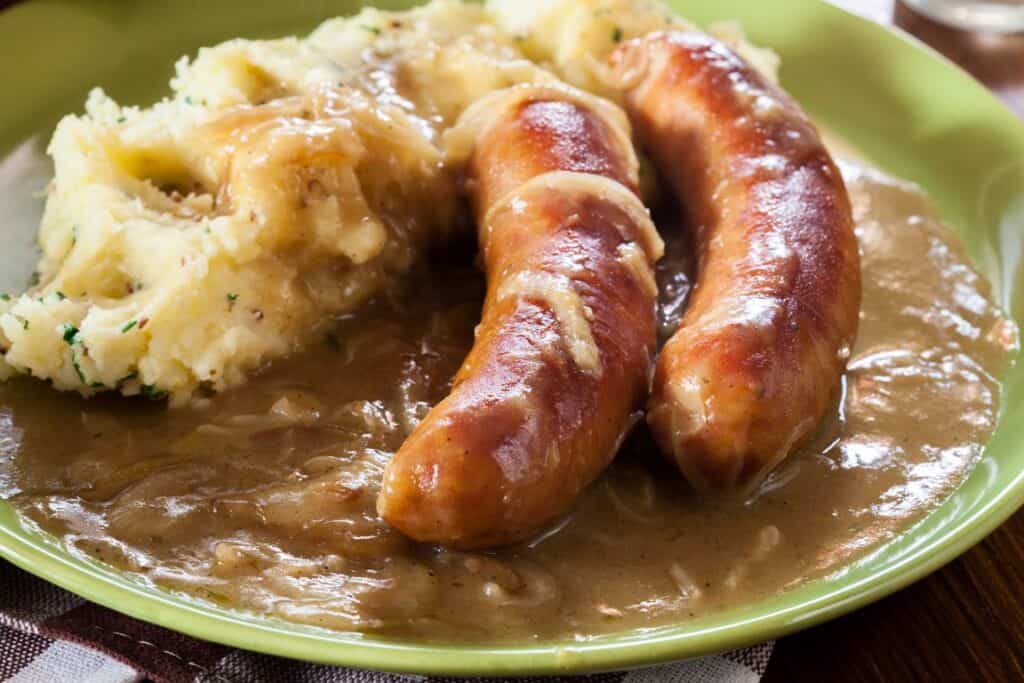 A firm favourite in our house – bangers and mash – or as it’s also known, sausage and mash! The combination of these two foods smothered in delicious gravy (onion gravy is the best!) is the ultimate in British comfort food.

It’s common to have a side of vegetables with bangers and mash to add a splash of colour – green peas work well and taste great with mash!

One of London’s most historic dishes, pies have been around in some form since the 1700’s.

According to Goddards at Greenwich – home to one of the original Pie and Mash shops – pies used to be known as “Eel Pie Houses” with pies filled with eels from the Thames. Goddards at Greenwich go on to say that as eels became too expensive, they were substituted with meat – which is the pies we know and love today!

Pies continue to be a favourite on the British menu, with many styles and varieties being on offer in different pie shops and other eateries.

There is a Pie N Mash social club that organise meetings where members get together and eat the traditional pies and join league tables in a bid to become the season’s pie champion! They also have a great directory and map of pie and mash shops if you want to go and experience this great London tradition! 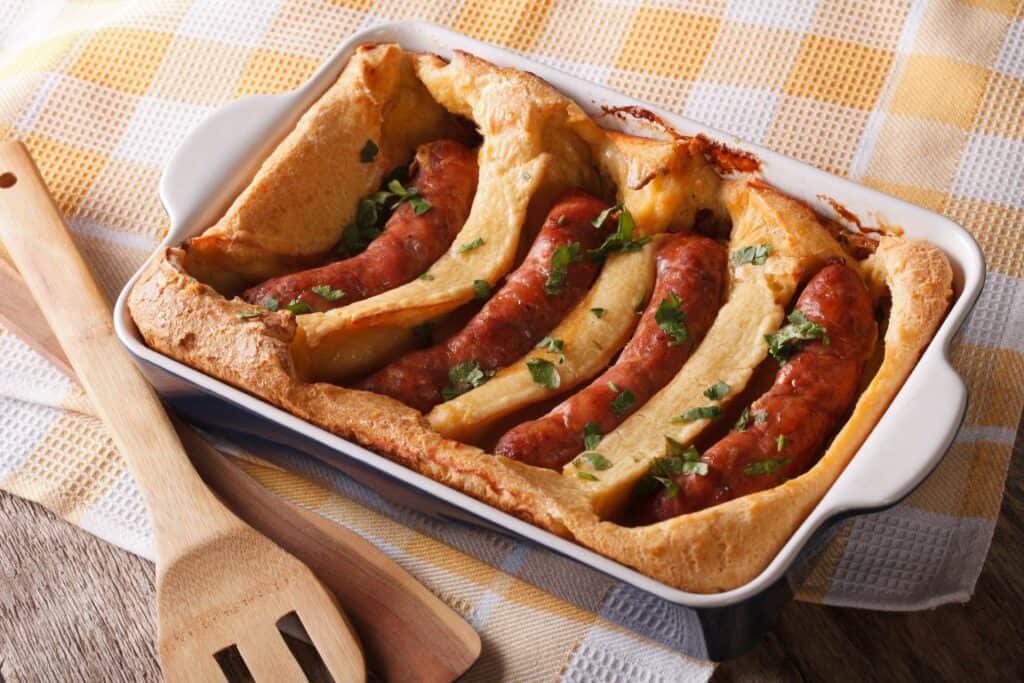 Toad in the Hole sounds like a funny name to those that have not been brought up with it as a regular meal time dish – and I suppose it is quite an amusing name!

Toad in the Hole is essentially sausages cooked in batter – the same as Yorkshire pudding batter. According to Wikipedia, Toad in the Hole first appeared in print in 1762.

Many people enjoy Toad in the Hole covered in onion gravy served with mashed potato and some vegetables. 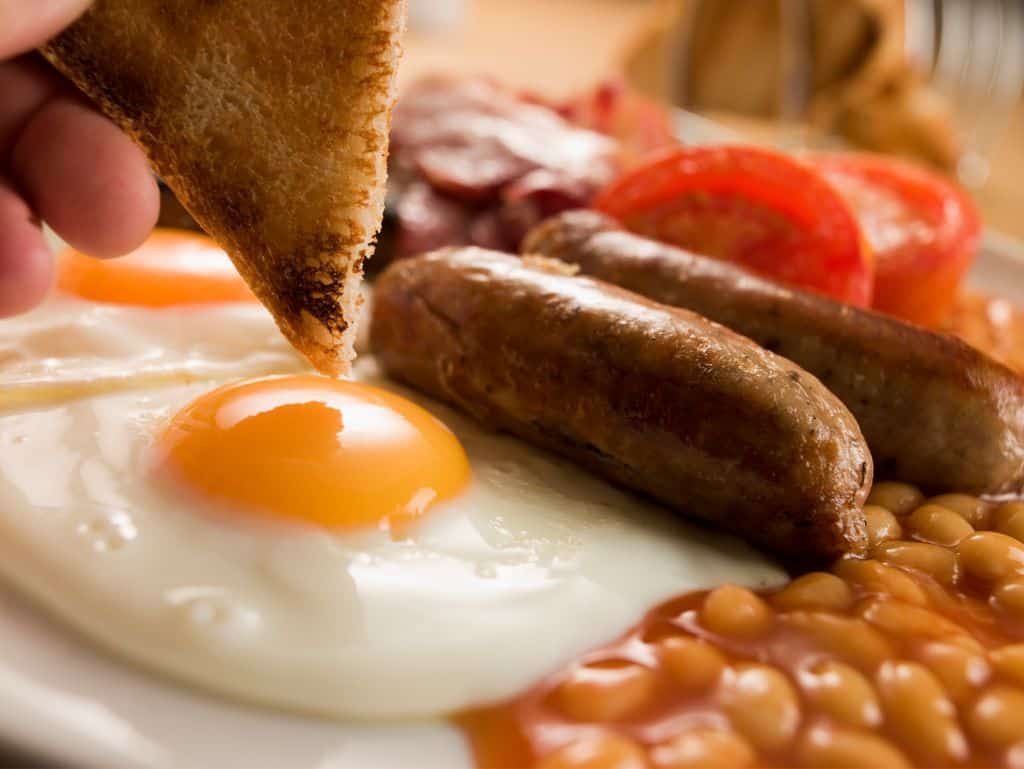 It doesn’t get much better than a full English breakfast. It’s the perfect way to start the day – it’s also a great brunch meal, particularly suited for those Sunday morning sleep ins!

You can either head to the nearest local café serving a fry up, or you can get the frying pan out and make your own!

You can make your full English breakfast just how you like it, mix and match, have it all, or just pick the ones you want from the following suggestions; 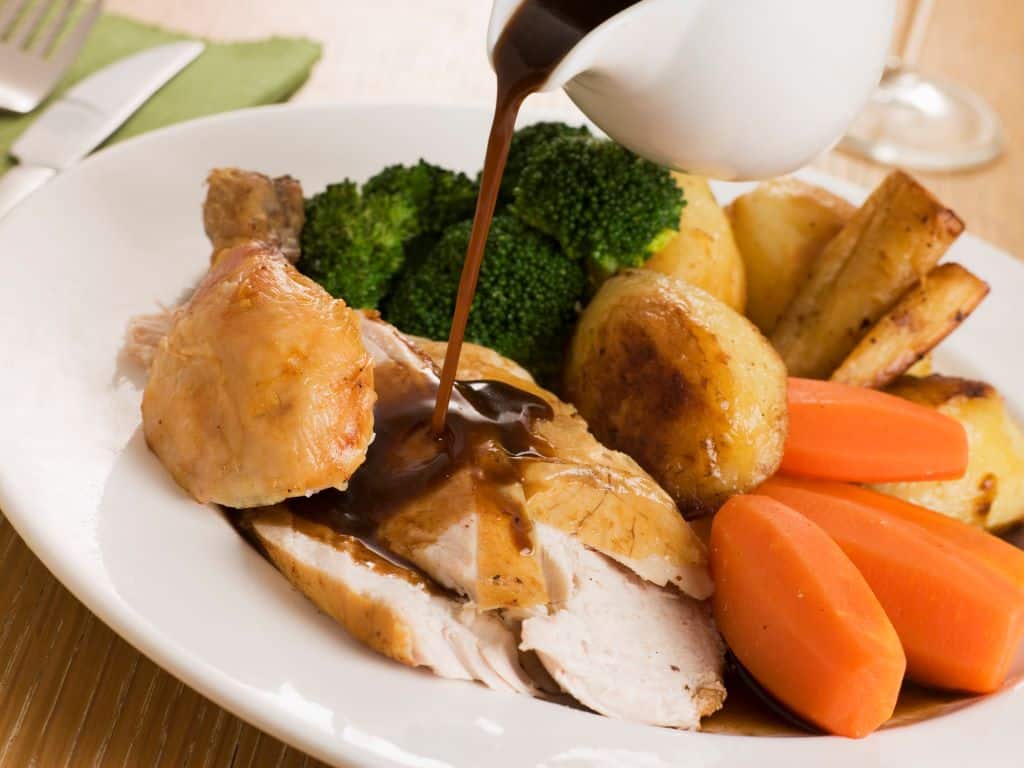 A Sunday Roast with all the trimmings is a tradition that has been alive in Britain since the reign of King Henry VII in 1485 where it was once roasted in the front of a large open fire.

There are plenty of restaurants and pubs where a Sunday Roast can be enjoyed, from a self serve carvery, to a country pub. But many households prefer to make the meal at home, providing the opportunity for families to come together around the dinner table.

Sunday Roasts vary in the meat that is used; beef, pork, chicken or lamb – or, for a vegetarian option, a nut roast is sometimes had.

The ‘trimmings’ that come with a Sunday Roast Dinner can vary depending on what is in season, a selection of the following is usually included;

The perfect pudding to have after a Sunday Roast Dinner is an apple crumble and homemade custard! 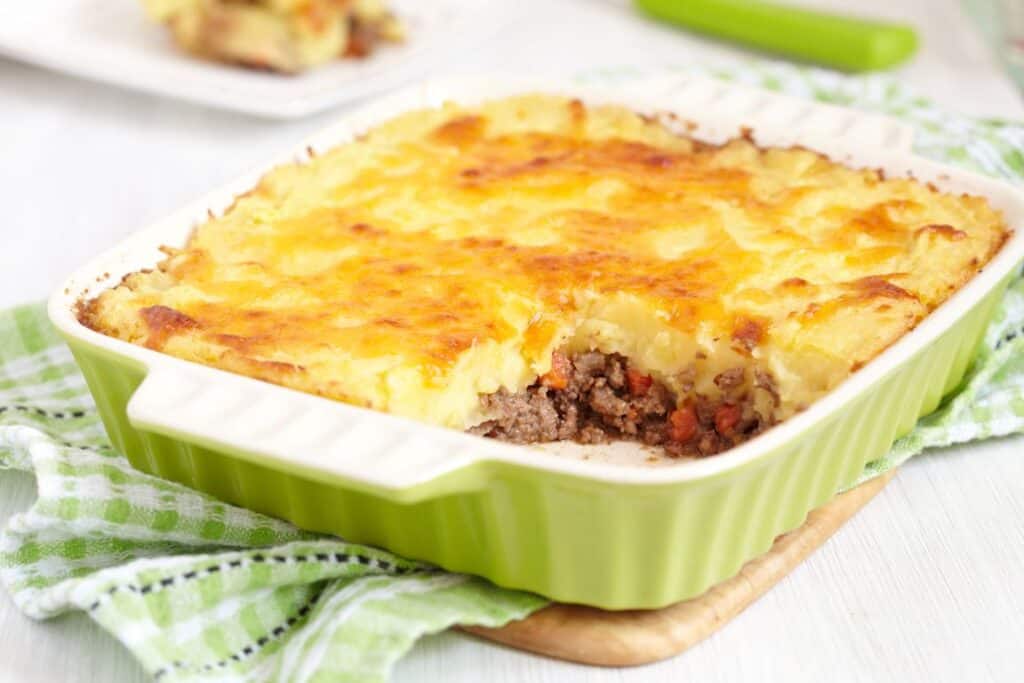 Another classic and comforting meal that involves mashed potato and gravy!

The meat is lightly fried with onions and garlic before gravy and vegetables are added – typically chopped carrots and sometimes peas. During this time, the mashed potato is prepared. The cooked meat mixture is transferred to an oven safe dish before adding a layer of mashed potato on top. Grated cheese is then sprinkled on top of the mash before the dish is placed in the oven for baking. 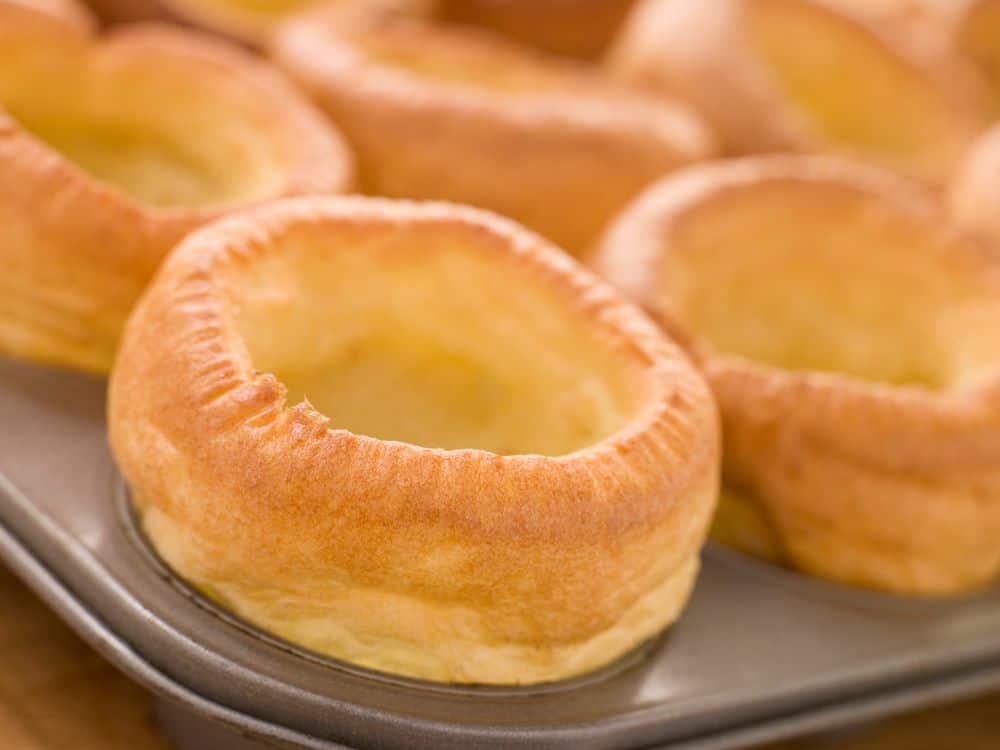 You can buy premade Yorkshire puddings from the supermarket, often frozen – they are handy to have on standby in the freezer as they don’t take long to cook in the oven.

However, making Yorkshire puddings from scratch is very easy – all you need are some eggs, flour, milk and oil. 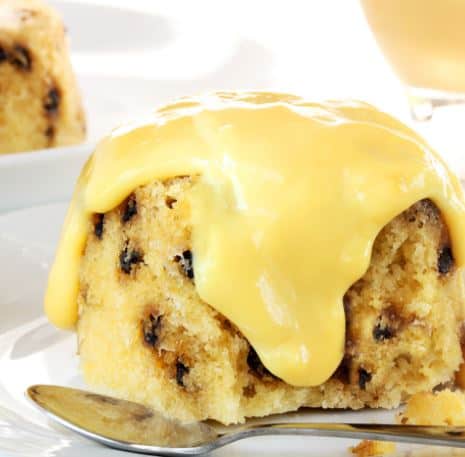 Spotted dick is a childhood classic that people will have fond memories of enjoying during school dinners and as a special treat for pudding at home.

This British recipe is made with dried fruits (the ‘spotted’ part) and mixed with flour, sugar and suet (although butter can be used as an alternative). Traditionally spotted dick is steamed for around 90 minutes and served with hot custard.

What food do you consider to be a British classic? Let me know in the comments! 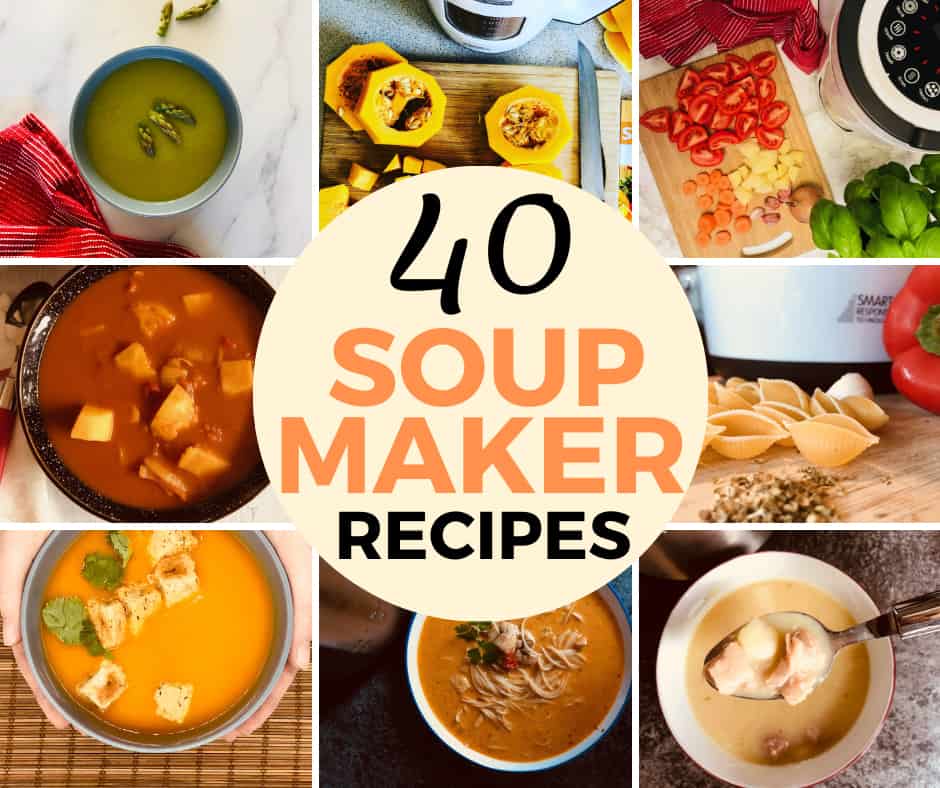