With the many different types of oats, how do you know exactly which one to use and when?

Here’s the lowdown on oat varieties on the market today. You can make your selection based on the time you can devote to cooking them, as well as your personal preferences for taste and texture.

Oats are one of the simplest and healthiest breakfast meals to enjoy. They’re easy to prepare and are packed with fibre, complex carbohydrates, plant protein, and a host of vitamins and minerals.

Best of all, they’re delicious!

Oats are a versatile ingredient that can also be used for snacks, smoothies, baked goods, and for thickening soups and sauces.

A groat is another name for a grain kernel. Groats are simply whole oat kernels with the hard, inedible hulls removed, but with the outer bran still intact. Of all the oat varieties, groats are the most nutritious and you’ll often find them in health food stores.

They are long and slender with a smooth, shiny surface, resembling brown rice. The kernels can be eaten at this stage but are often processed further into other oat types.  They often require soaking before cooking and remain very chewy.

Prepare groats as you would pasta: boil in salted water until tender, then drain. You can make porridge by soaking them overnight and cooking on low heat for 45-60 minutes on the stovetop, in the slow cooker, or pressure cooker. Unsoaked, they can take 15 minutes more to be done.

You can also try groats as a hearty ingredient in salads, risotto, stews, and soups. For maximum flavour, try toasting them before adding the water. This will lend a nutty taste and enhance the flavours of the meal you’re cooking. 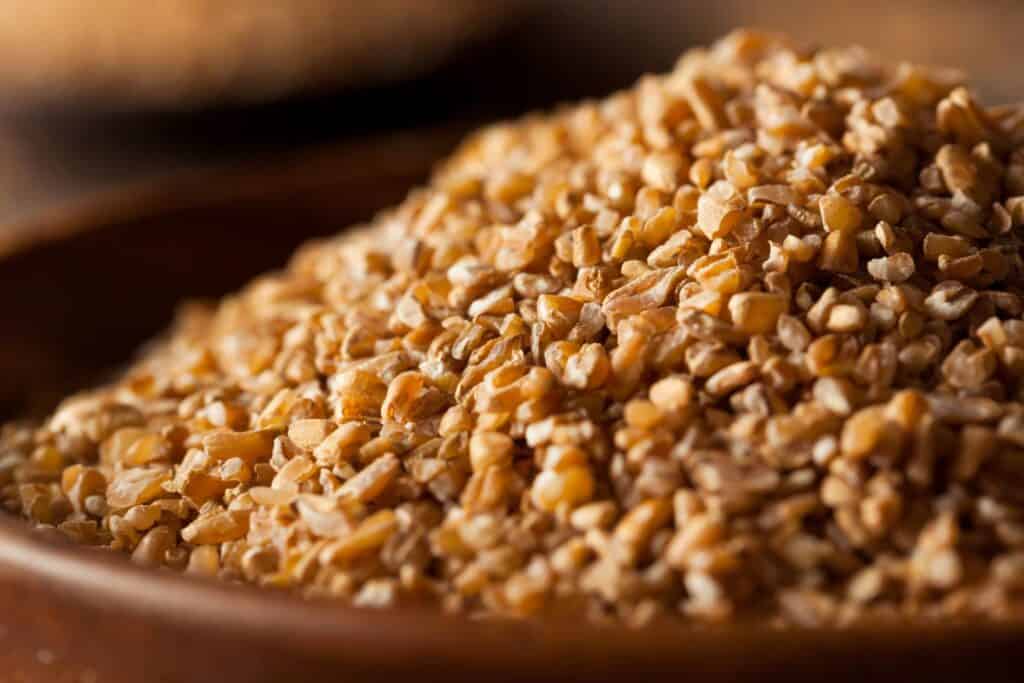 These are groats that have been cut into two or three parts using sharp metal blades.  Since they still contain the whole grain including the bran, steel-cut oats are very nutritious.

They can be a wholesome alternative to other grains and provide a hefty, satisfying meal. They have a chewy texture and nutty flavour, and are usually used for producing savoury products such as sausage and stuffing mixes, black pudding, and haggis. They are also used as meat and fish coating and crumble toppings.

Cooking time takes around 25 to 30 minutes.

Recognised in the UK as “the original” or “the true” oatmeal, Scottish oats resemble a coarsely ground flour much like cornmeal.

Instead of cutting groats with a steel blade, the Scots traditionally stone grind them, creating broken bits of varying sizes. It’s a centuries-old process that produces a hearty porridge with both a creamy texture from the finer ground oats and a bit of chewiness from the coarser grits.

Cooking time for Scottish oats is approximately 10 minutes on stovetop and 3 minutes in the microwave (see a recipe for microwave porridge).

The most common of them all, rolled oats are groats that have been toasted, hulled, steamed, flattened into flakes by a steel roller, then finally, dried.The process stabilizes the oils in the oats, helping them stay fresh longer.

They come in regular as well as thick-cut versions.

The flattened oats have a wider surface area, allowing them to absorb more liquid and require less cooking time.  These guys hold their shape when cooked.  They are slightly creamy but still a bit chewy.

They have a mild flavour that also works great in breads, pancakes, smoothies, and traditional porridge.

To cook for porridge, simply add water or milk then heat gently for 6 to 8 minutes.

Prepared in a similar way to rolled oats, quick-cooking oats have been rolled into thinner flakes and cut into small pieces, making them easier to cook. They are by far the quickest to make a real, wholesome porridge out of.

And because of their finer texture, they’re often used in baked goods, as bread coatings, and as a base for cheesecake.

The cooking time is approximately 5 minutes.

These have been steamed even longer than quick-cooking oats, then cut smaller and pressed even more thinly for instant preparation.

The additional processing that instant oats go through tends to cause them to lose some of their texture and flavour, so you’d often find them sold in single-serving packets with added flavours and sweeteners mixed into them.

The upside though is they’re the fastest and most convenient way to get a helping of oats when you’re in hurry or on the road.  Just add hot water and they’re ready in a minute. They’re easiest to digest, too.

Instant oats are fine at a pinch but if you’d like your own flavours, look for the plain variety so you can add your preferred seasoning and toppings.

Oat flour is simply groats that have been milled to a fine powder.

It is used to thicken sauces, soups, and gravies, and is often used to replace 20% of wheat flour in cakes, pastries, and breads, and 100% in muffins and pancakes.

Oat flour can be bought commercially, or prepared at home using a blender or food processor.

To make it yourself, just process rolled oats into a fine powder, then sift.  115g of rolled oats will yield roughly 100g of oat flour.

Oat bran is technically a by-product of oat processing, the oat bran being made from the outer layer of the kernel once the husk is removed.

Because bran doesn’t contain the kernel’s germ or endosperm, it isn’t considered a whole grain. But it’s still very nutritious and high in soluble fibre – fibre content is exceptionally high at 50% – and is sometimes sold as a healthy eating supplement. Bran is in fact widely used by dieters and slimmers because it swells in the stomach and can absorb up to 25 times its volume in liquid, giving a feeling of lasting fullness.

Oat bran be prepared as a rich and creamy hot cereal or sprinkled on cold cereal.

In cooking, it is incorporated in small quantities into quick bread, biscuits, muffins, cookies, and casseroles.  It can also act as a binder in meat patties to keep the meat light while introducing more texture and fibre.

So which type of oats are best to use? It really depends on you. No matter which you choose, oats are a great way to add nutrients and fibre to your daily menu.

As an end note, oats are inherently gluten-free. But they do tend to come in contact with other grains that contain gluten – such as wheat and rye – during milling and processing. As they may contain trace amounts of gluten, look for the “Certified Gluten-free” label if you’re on a gluten-free diet.