Over time, Yule Log has grown to be a Christmas staple in many European countries, in particular the United Kingdom. While it may seem daunting at first, the process of  making it is surprisingly straightforward, and is a great chance to express your creativity (not to mention it’s delicious!). I have included lots of photos to make the whole process easier.

Yule Log originally came from the very old Norse pagan winter solstice celebration called Yule, which eventually evolved to people burning an actual log in celebration of Yule. Yule marked the days becoming longer once more and the land becoming more fertile after the shortest day of the year.

Today, some people do still burn a Yule Log on Christmas Eve, but many have Yule Log cakes, which are synonymous with the festive season.

For the chocolate ganache bark:

To start with, we will make the cake part of the log.

Start by whisking the three eggs with the sugar in a large mixing bowl with an electric whisk, until they go pale and are a bit frothy, however do not whisk until they are stiff, as this will make the cake crack very easily when rolling it. 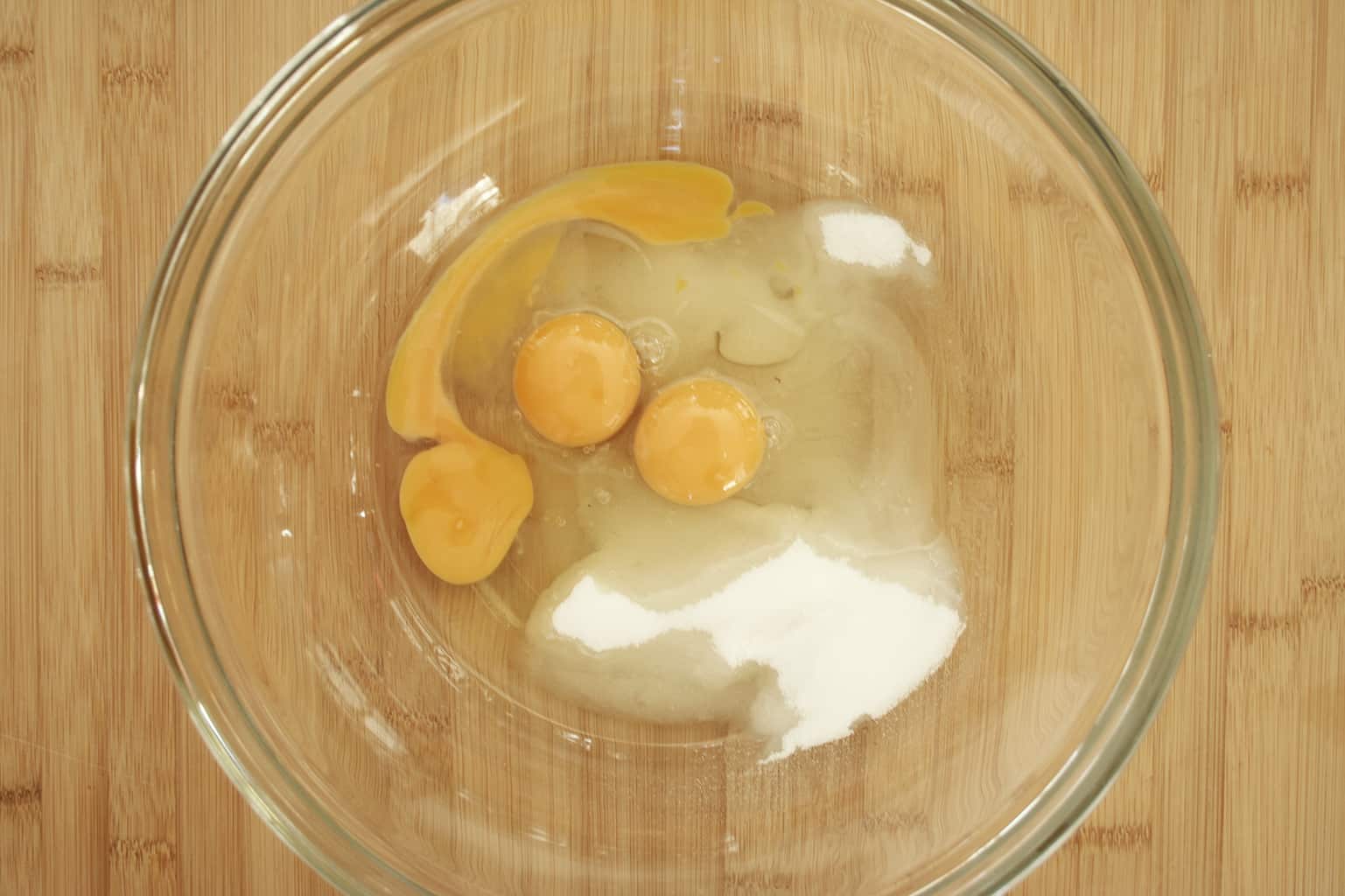 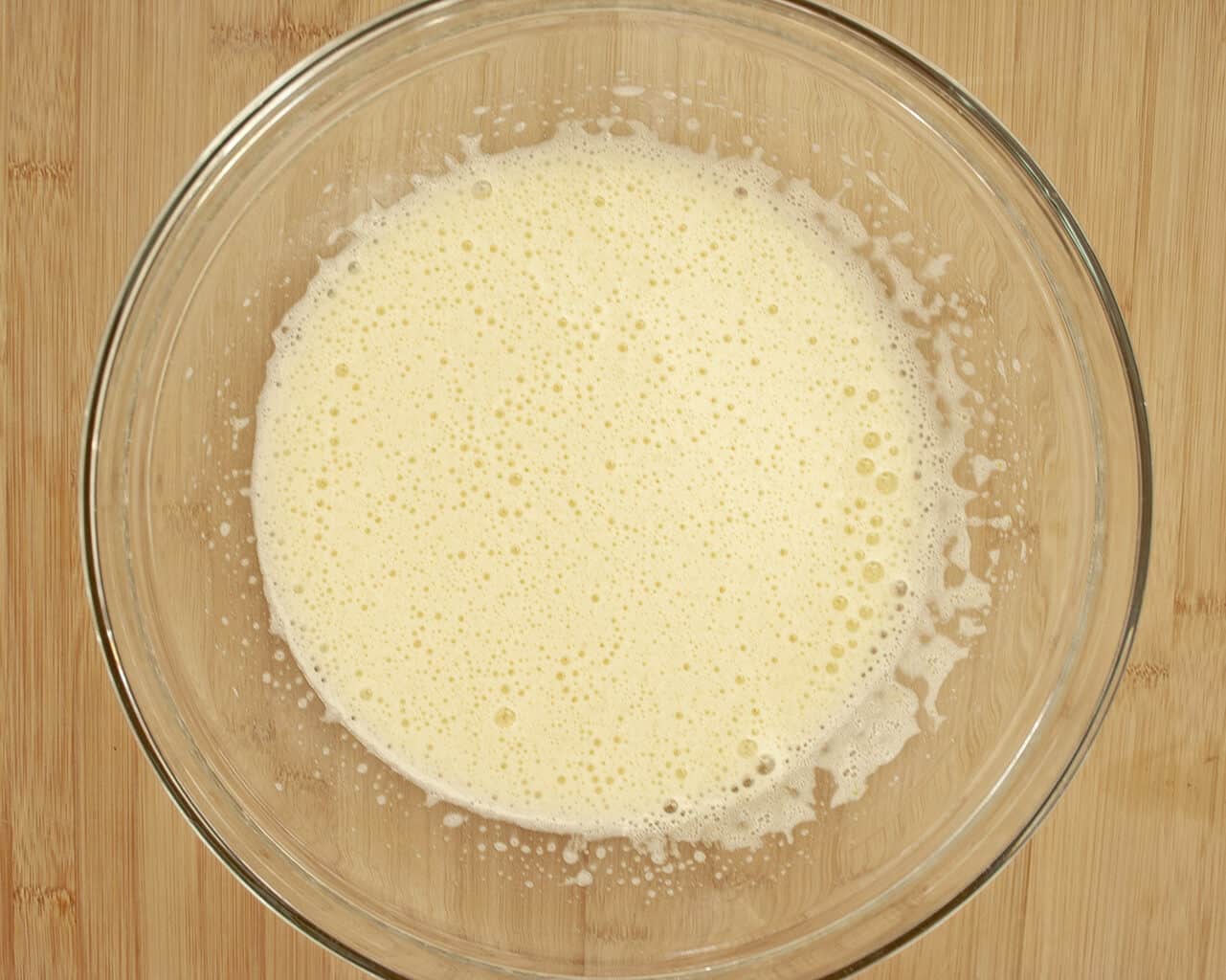 In a separate bowl, combine the plain flour, cocoa powder and baking powder, and then sift over the egg mixture. Fold in gently with a spoon until well combined. 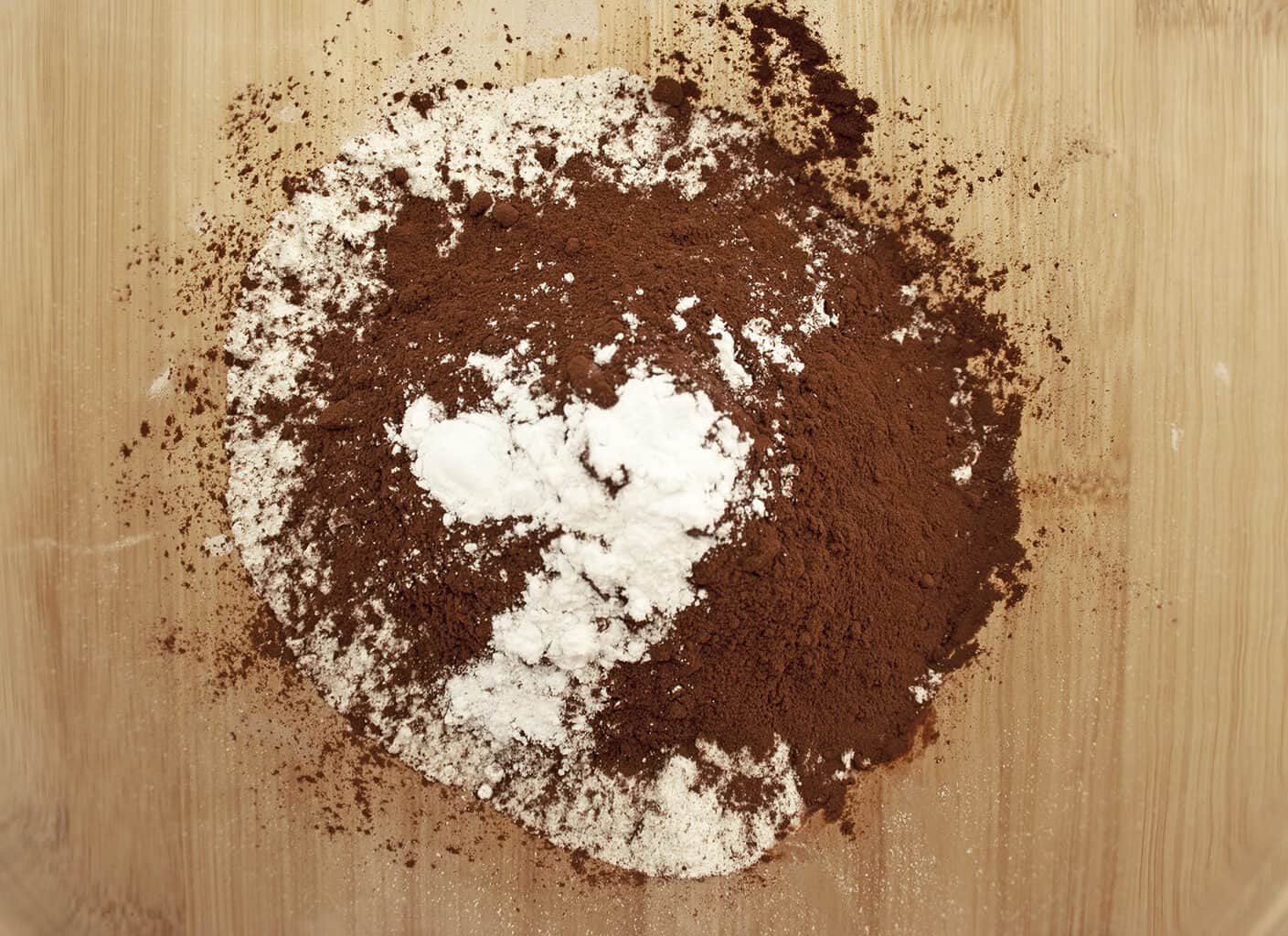 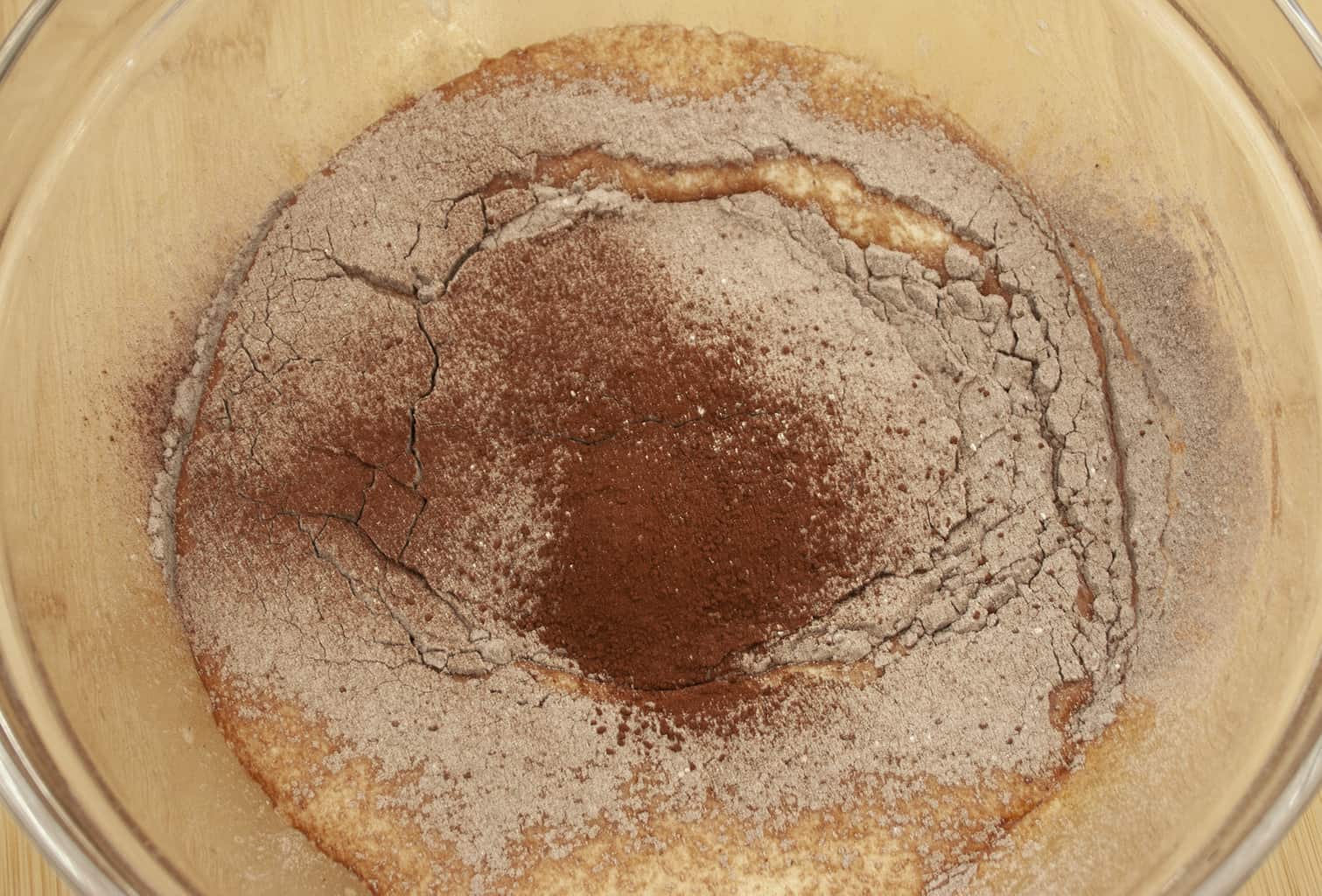 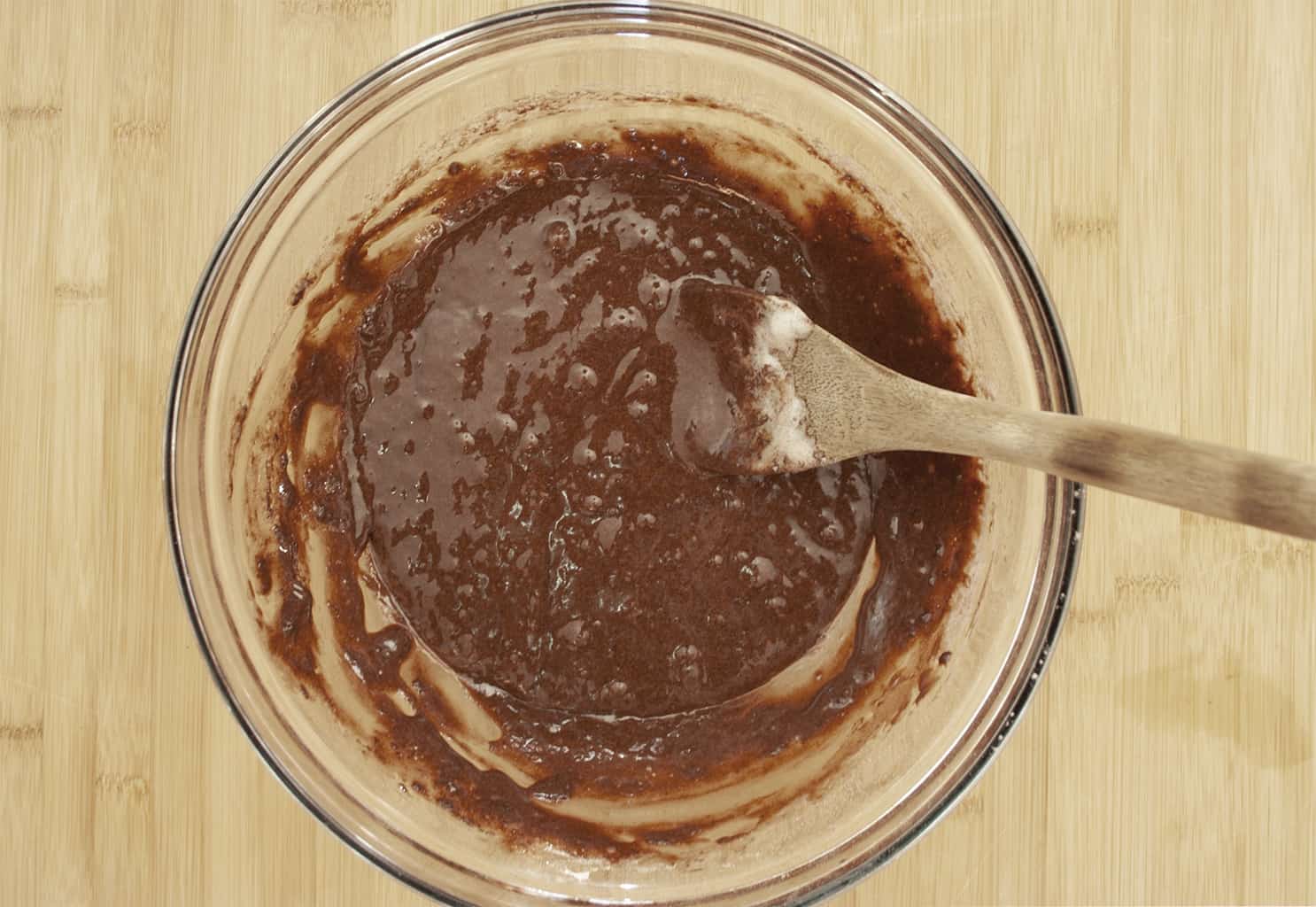 Line a rectangular cake tin with baking paper (about 23 x 30 cm or 9×12 inches, other dimensions will work, but the end log will be a different size). Use a bit of butter in the tin to make the paper stick to it. 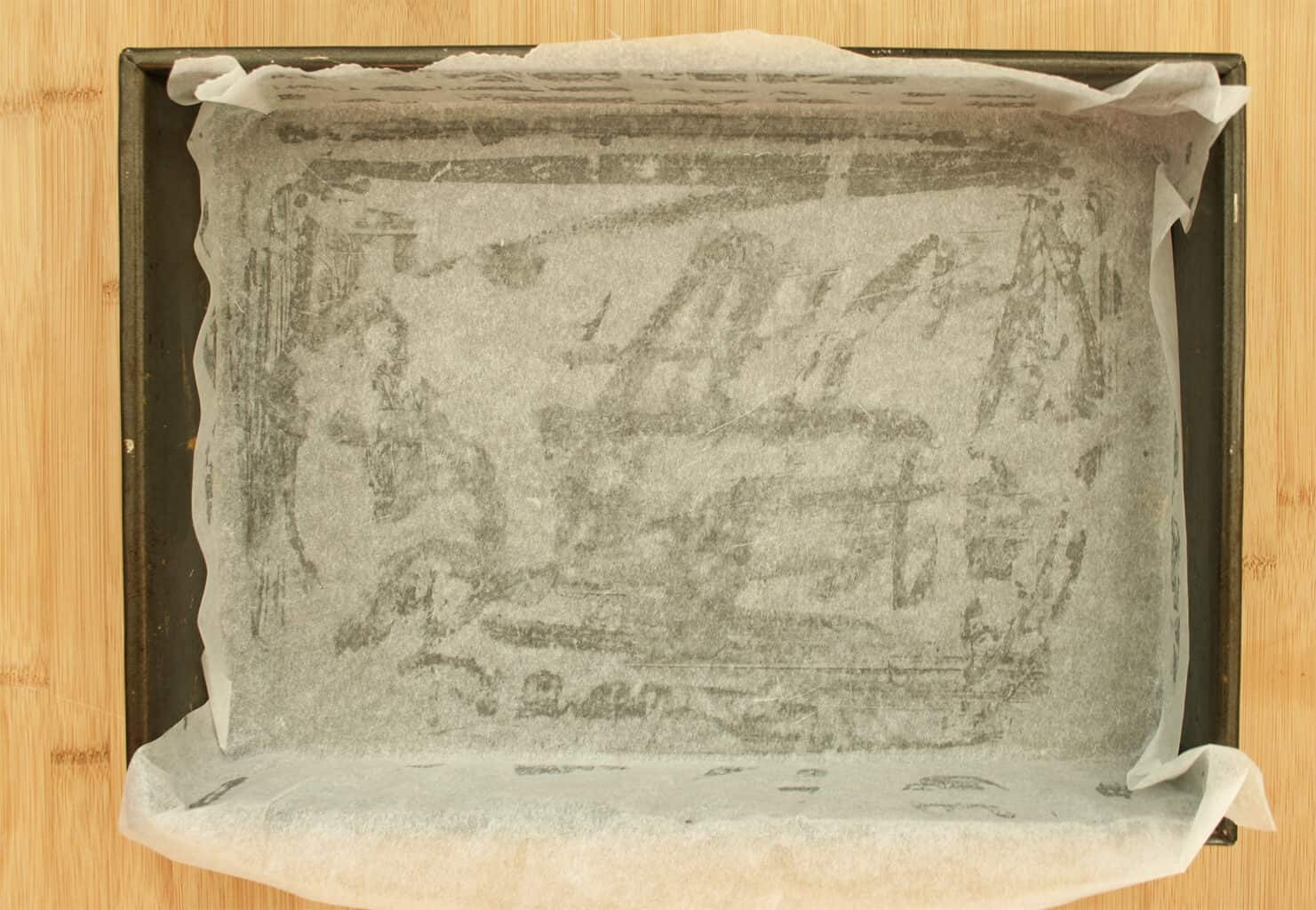 Pour in the cake mixture, using a spatula to get all of the mix out. Shake the tin and flatten with a spatula to make the mixture level in the tin. 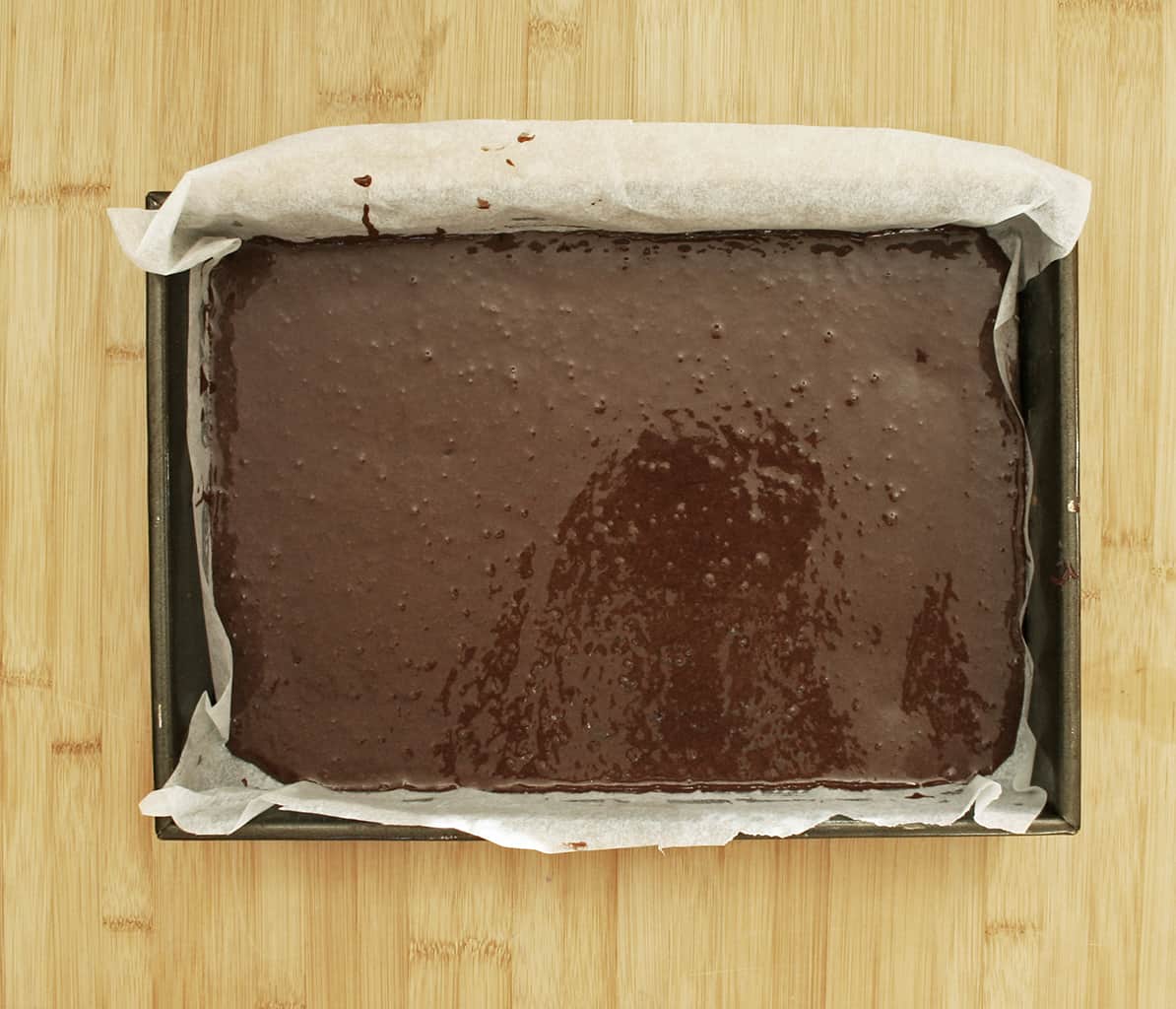 Bake for 12 minutes. Don’t be alarmed, the cake will not rise very much.

Lay a sheet of baking paper on the side, and once it has finished cooking, turn it out onto the paper, peeling off the paper from when it was cooked. Turn off the oven, you will not need it any more. 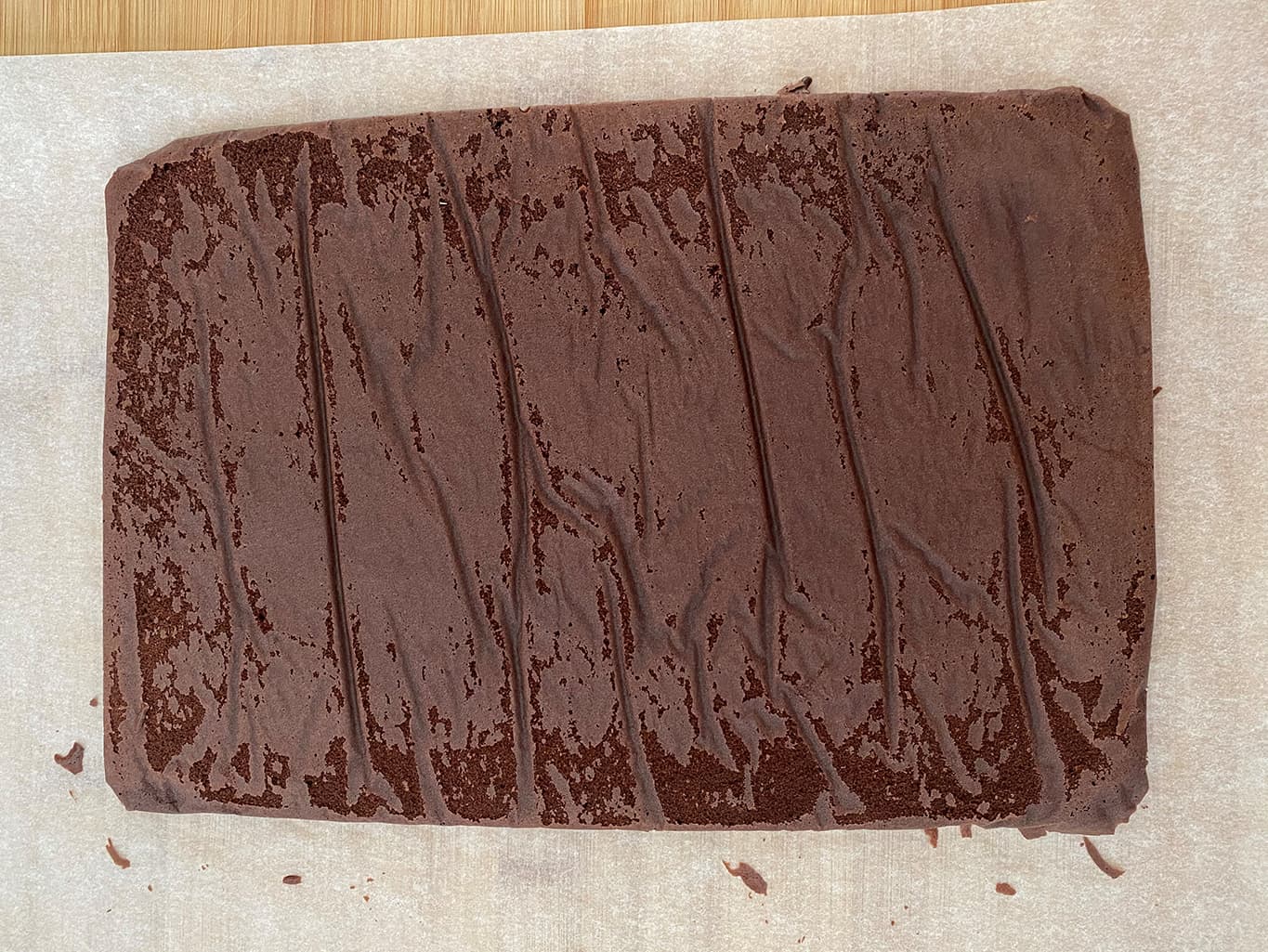 As soon as it is cool enough to handle, when it is still hot, gently roll up the cake in a spiral, with the paper inside. I did mine from the long edge, but it really doesn’t matter, it just means mine will be longer but with less swirls inside. 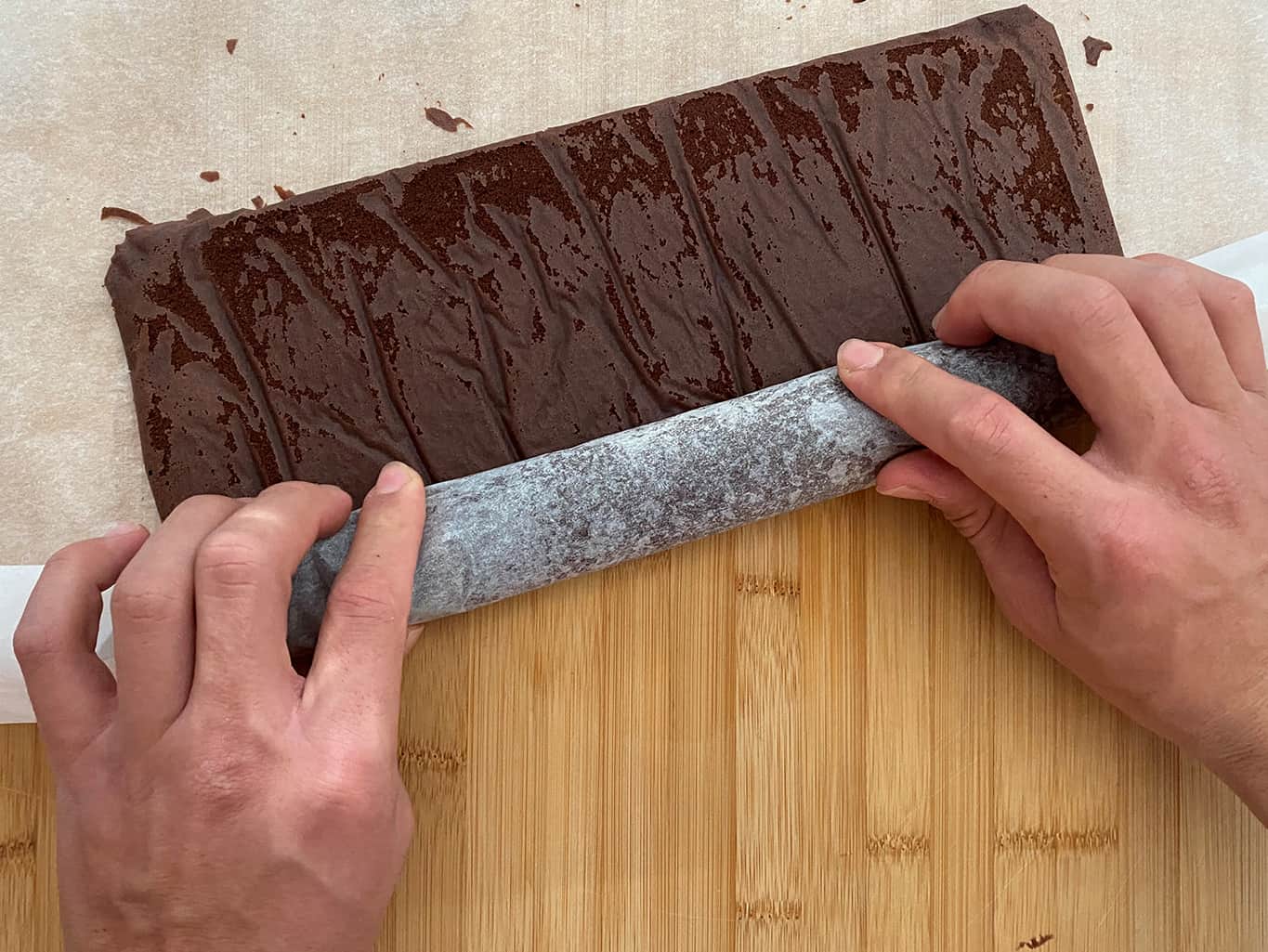 Secure the baking paper with tape if it wants to unroll, and leave to cool rolled up. 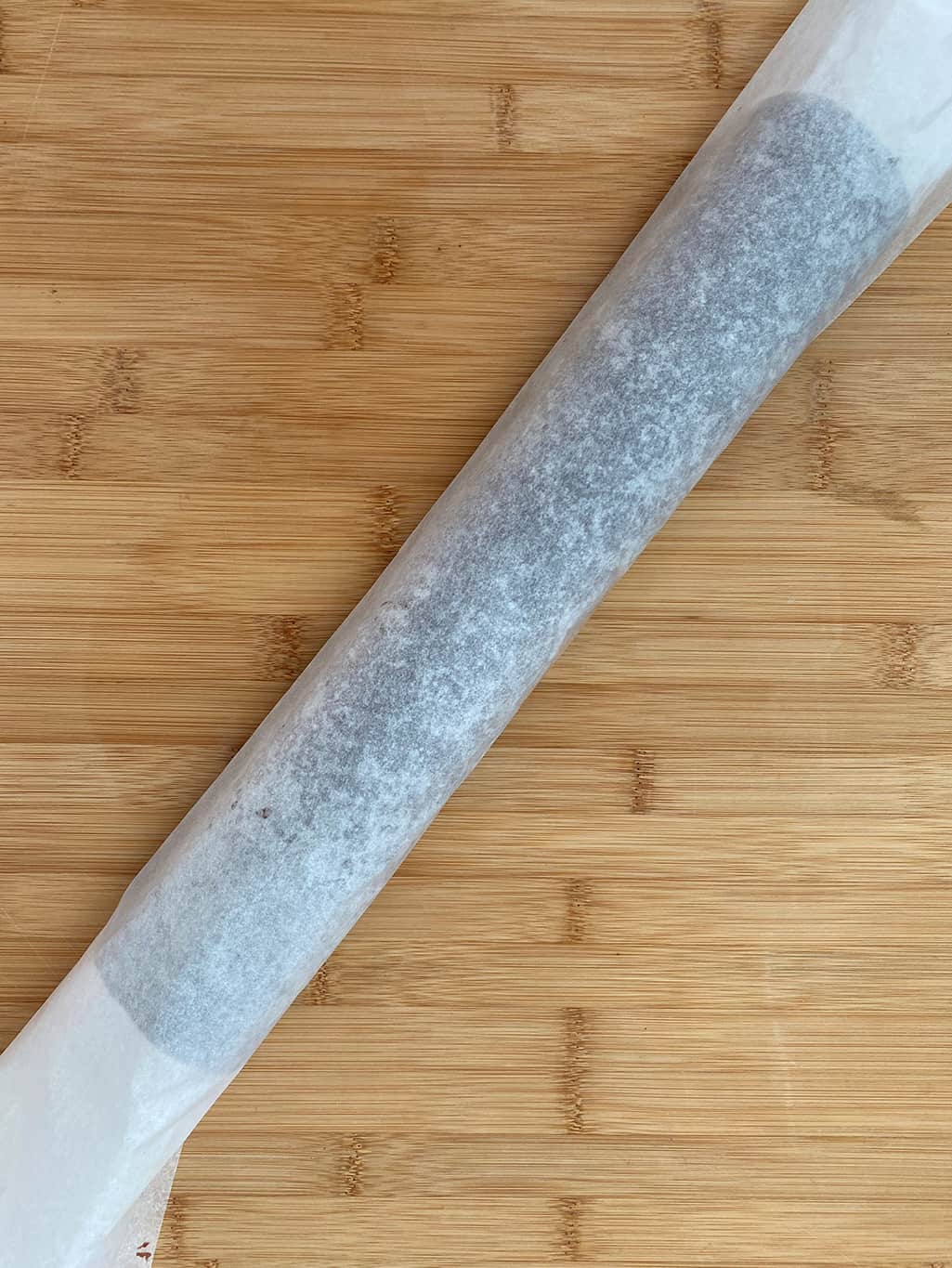 Next we will make the ganache bark. Ganache is basically a chocolate frosting that is a bit more fudgy in texture.

Melt the chocolate and butter in a bowl over boiling water, stirring it as it melts. We melt the chocolate gently like this rather than straight in the pan or in the microwave, so it doesn’t burn. 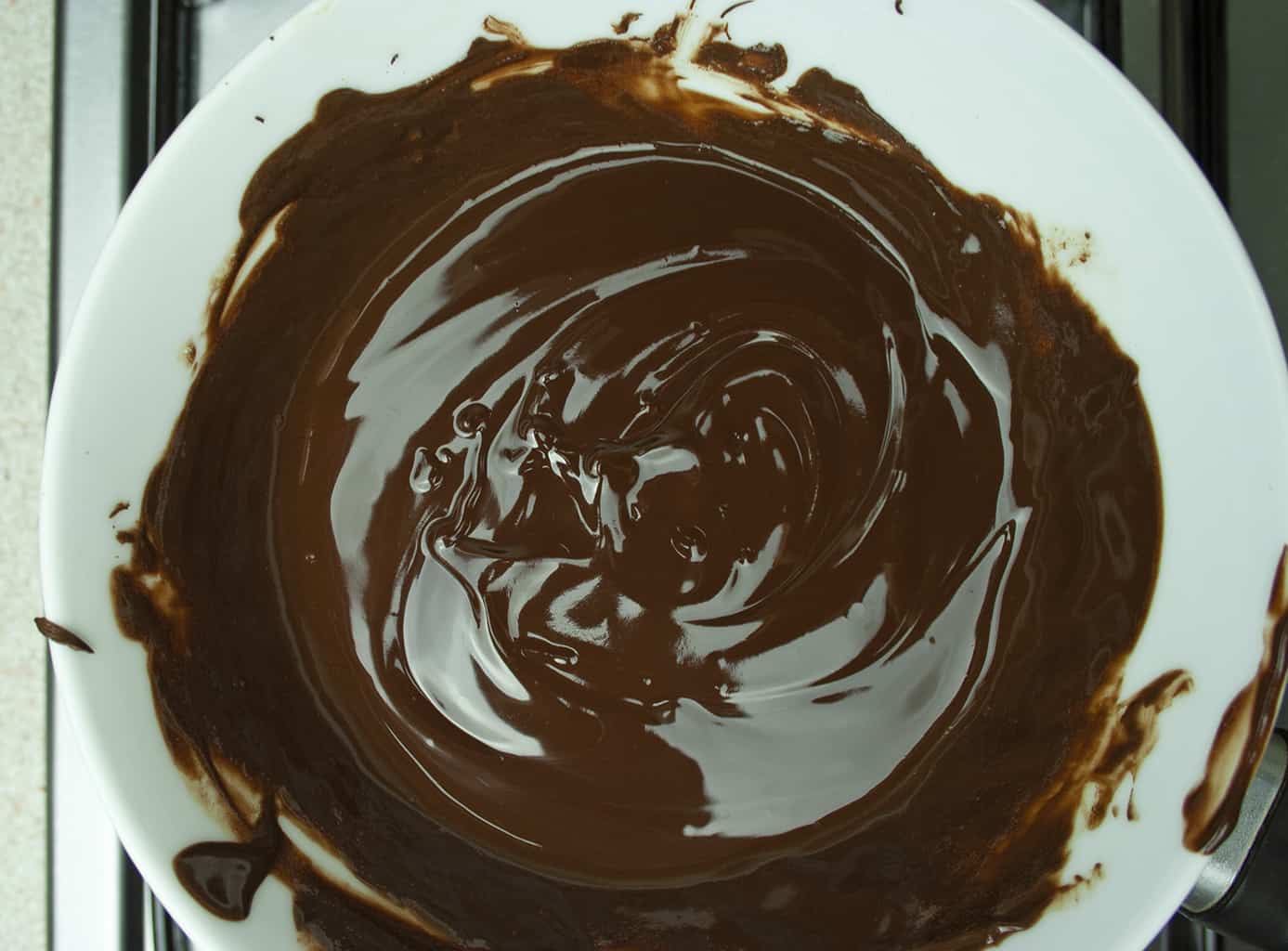 Remove from the heat. Add the 5 tablespoons double cream and the 1 tablespoon golden syrup, and mix until combined. 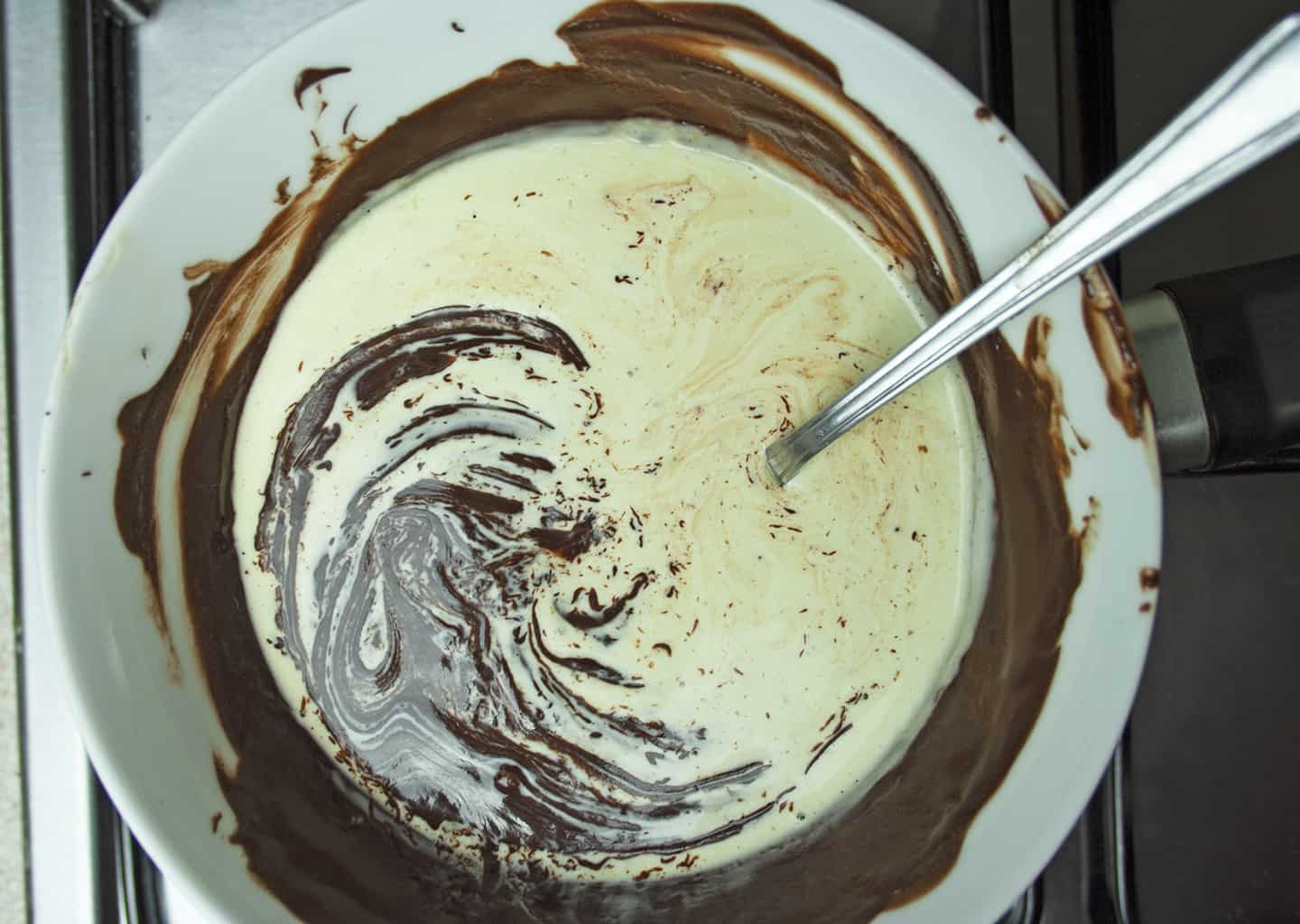 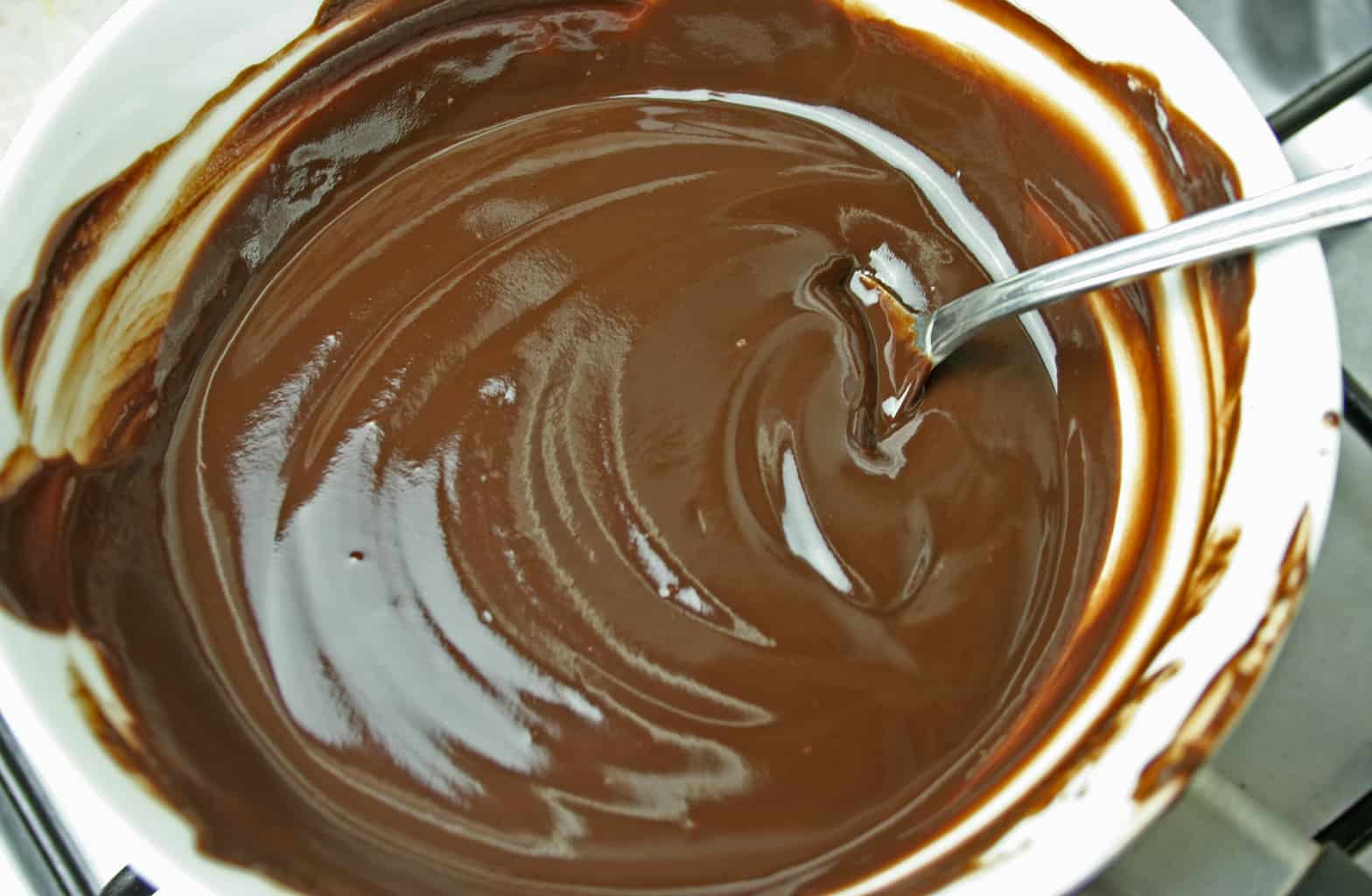 Sift in the icing sugar and mix until well combined. To avoid a mess with the icing sugar, add a little bit at a time, and mix after each addition. Transfer to a larger bowl if needed. Set aside. 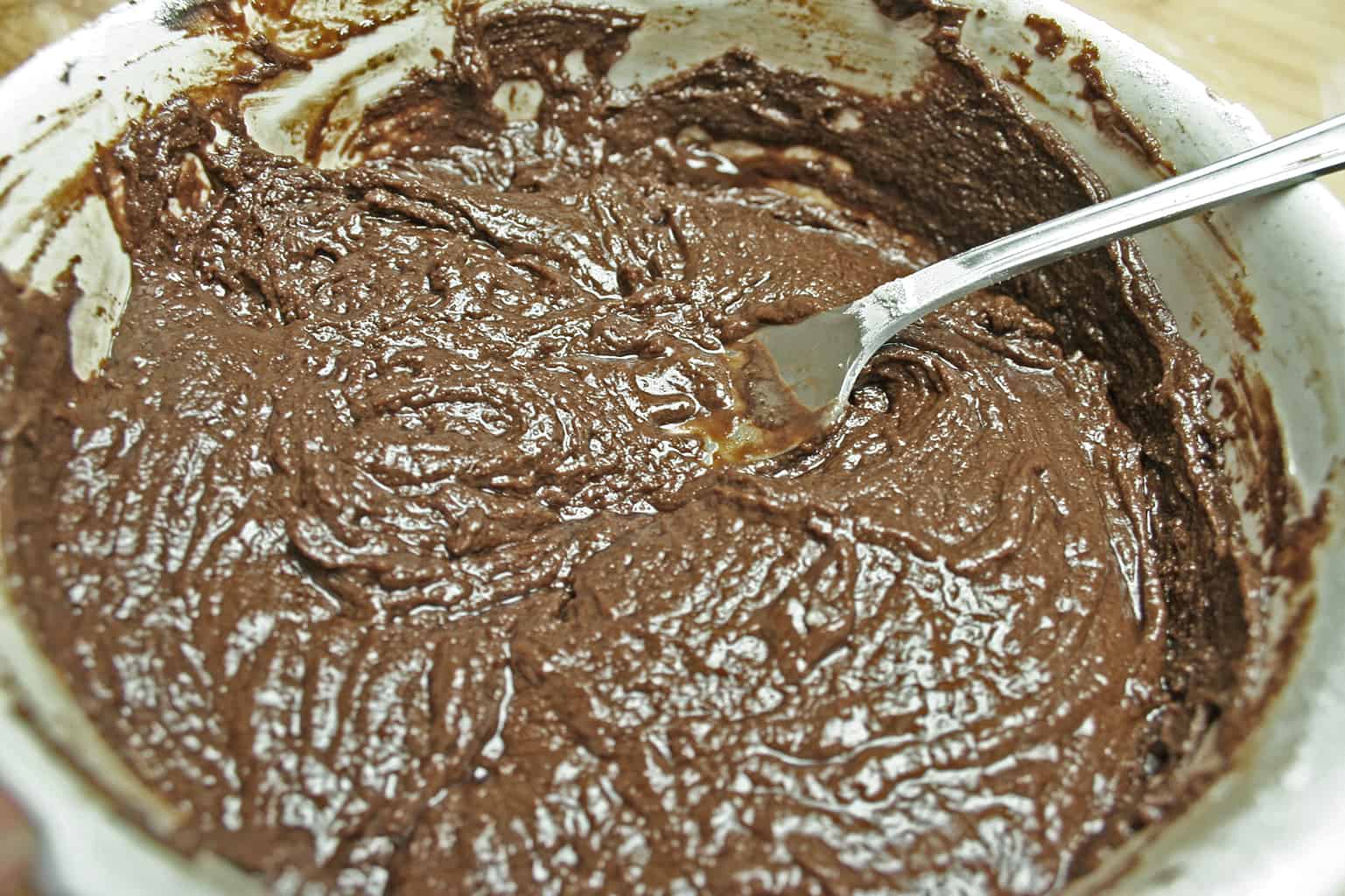 Woah, nearly there, just the easy bit to go now!

To make the filling, simple whip the remaining double cream with the tablespoon cocoa powder with an electric whisk (hand whisk will take a while!) until it holds its shape (while still being spreadable). When whipping, it will of ten look firmer in the bowl than when you start to spread it, so don’t worry if you think you have overdone it. 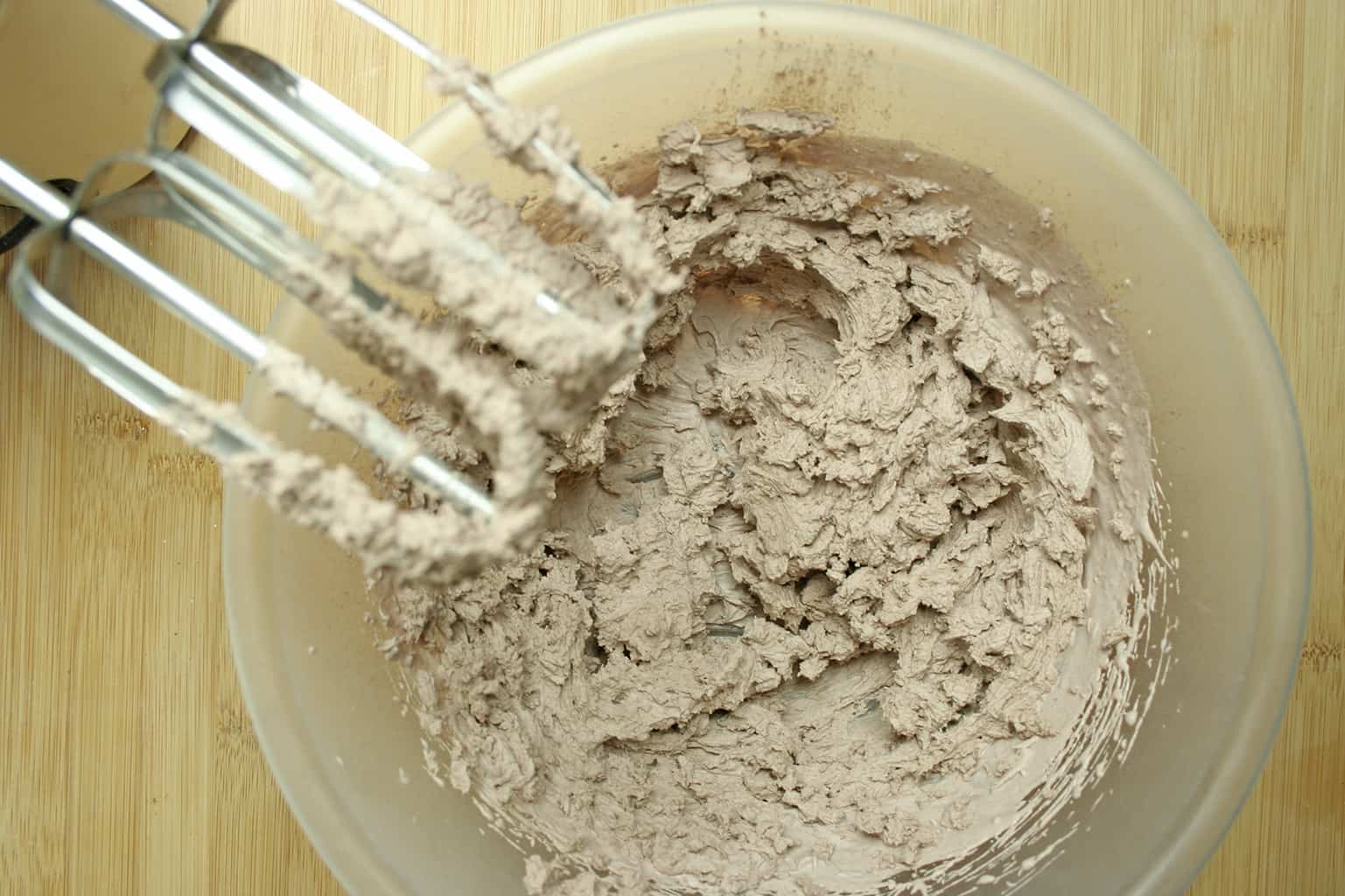 Gently unroll the (now cool) cake. Don’t try to press it flat, as it will likely crack. Spread the cocoa cream over the whole cake in an even layer, ideally with a palette knife. 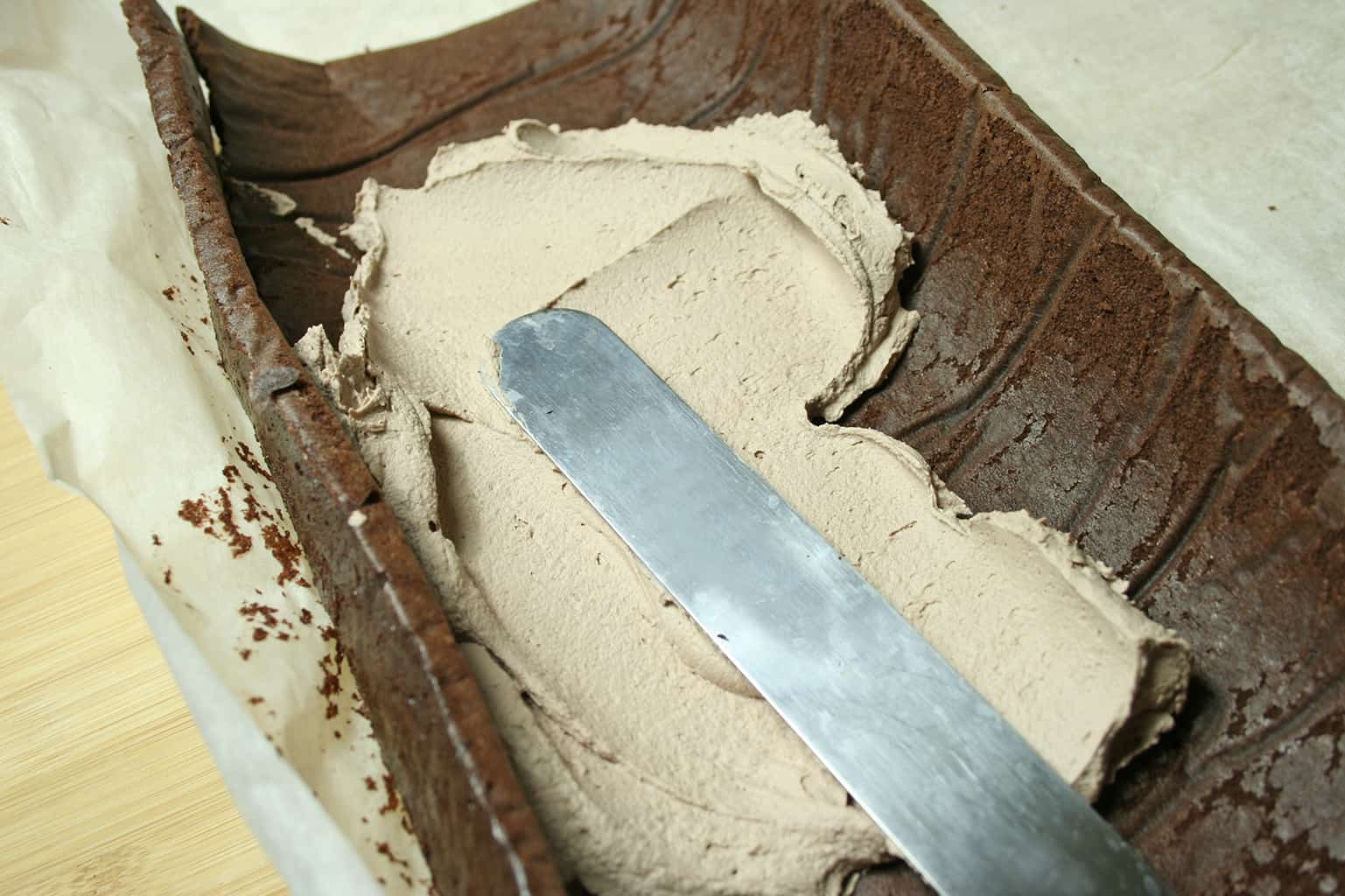 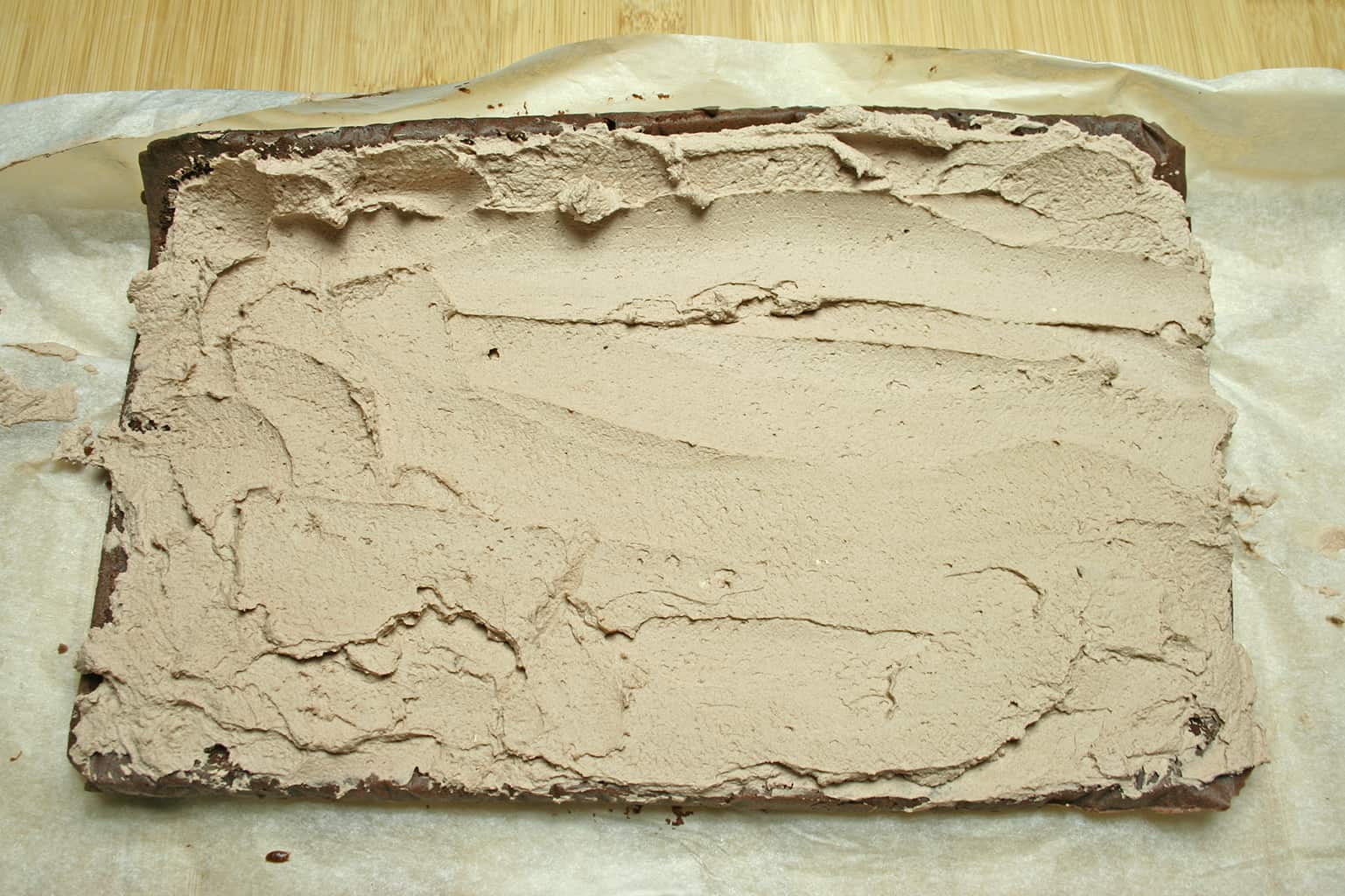 Gently roll up the cake in the same way you did when it came out of the oven, but make sure you remove the baking paper as you do. 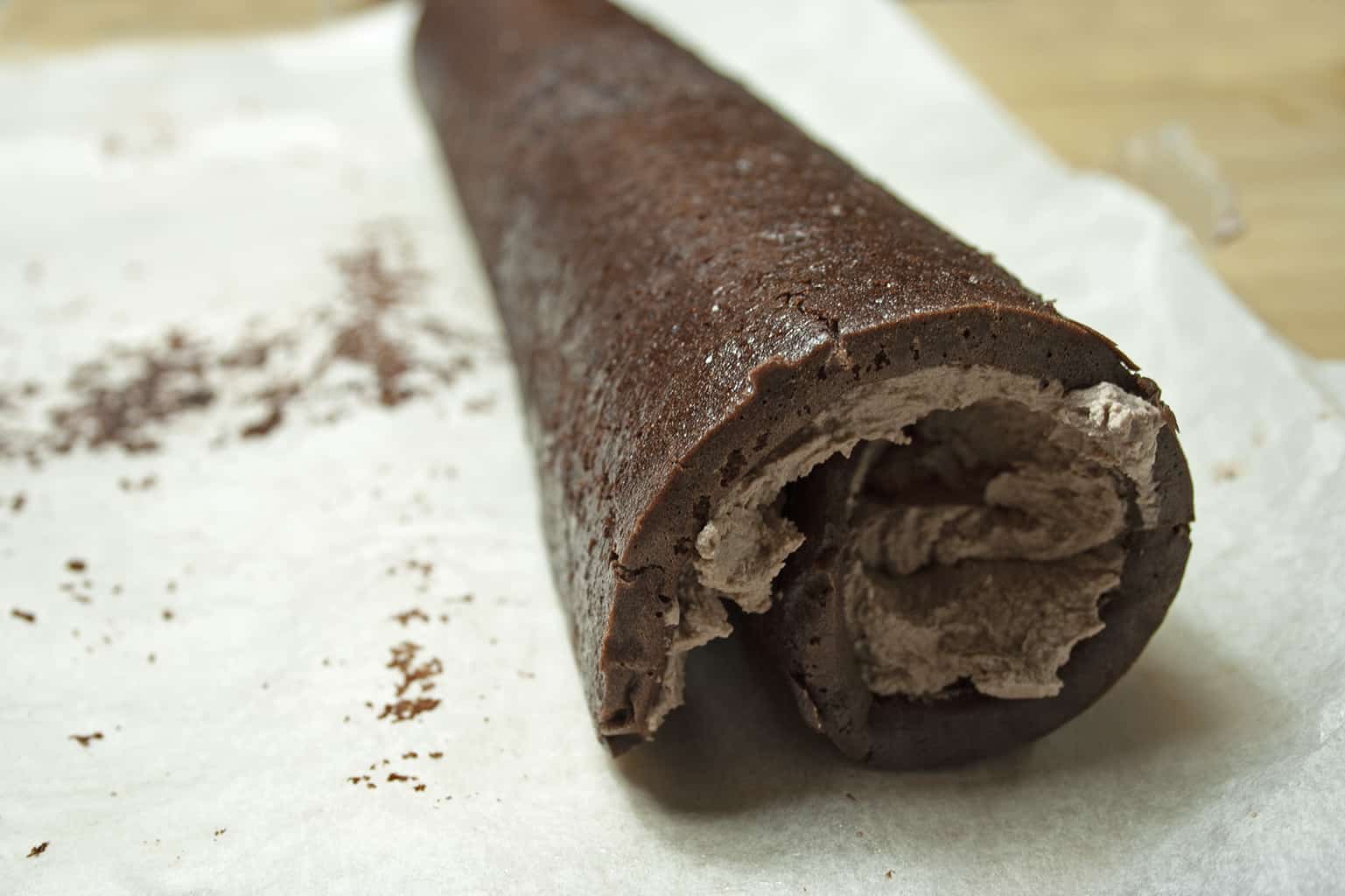 For some added flair, make a diagonal cut about 1/3 from the end of the log, and place the offcut on the side of the log to make a “Y” shape. Now is the time to place it on it’s final plate/cake board. 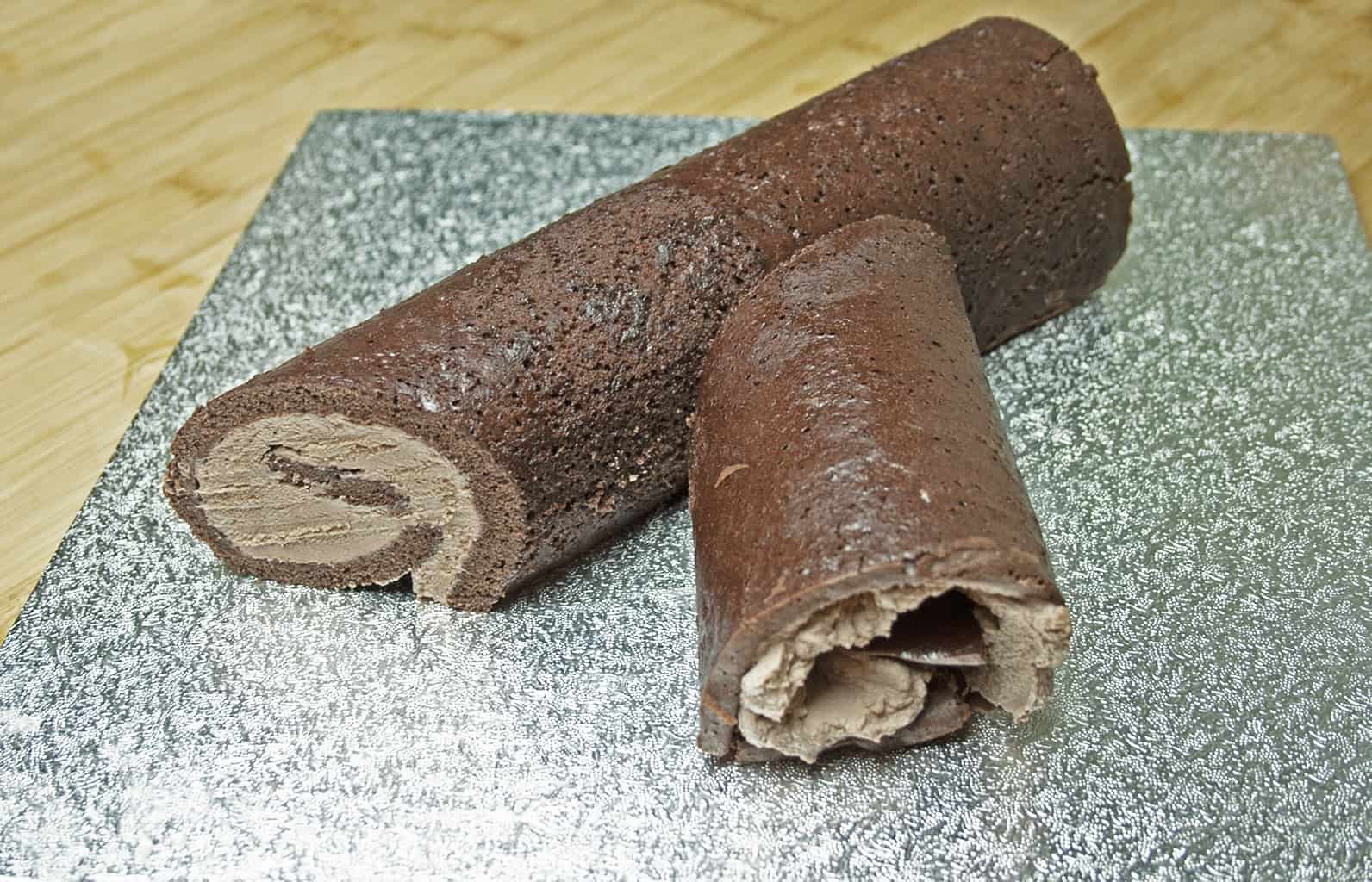 Spread the ganache over the whole log, except the ends. Again using a palette knife will make it easier, but if not, you can use a normal knife and/or a spoon.

Use a fork or a cake scraper to etch lines into the ganache, to make it look more like tree bark. Wipe up any ganache or cream that has gone over the board for best presentation.

Sprinkle with a few pinches of icing sugar to represent snow. Add the final decorations, this could be sugar decorations from the supermarket, or flakes of chocolate scraped off a chocolate bar with a sharp knife (or both!). 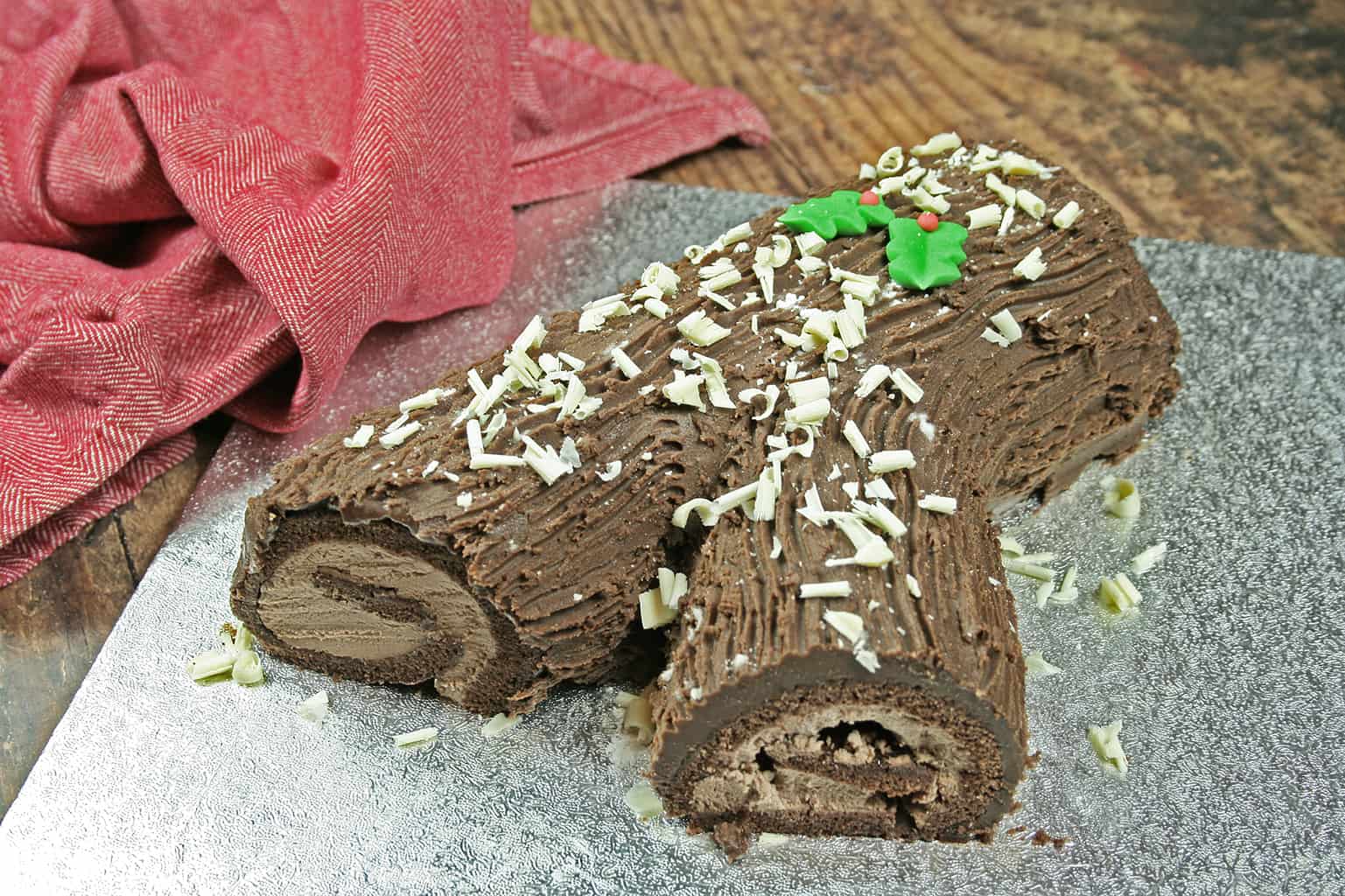 Et voila! Your Yule log is done, a real wow bake to impress the family.