Whilst there are many different types of mushrooms – over 15,000 varieties* in the UK to be exact – not all of them are edible!

In this article, we will only be discussing the edible mushroom varieties – none of the poisonous ones!

We should also add that this is not a guide to wild mushroom picking, merely the mushrooms that you can go and buy at the supermarket or market stall!

9 Types of Mushrooms (And What They Can Be Used For)

Mushrooms are incredibly versatile and can be eaten raw, dried, or cooked. They’re a great way to add taste to your dishes because they soak up flavours like salt and butter so well.

Here’s a list of the most common types of mushrooms you’ll find at the supermarket, as well as how each type is best used.

Shiitake mushrooms have been documented as early as 1000 AD in Japan where they are a national treasure. They are an edible mushroom that is often used in Asian cooking and have a distinctive, earthy flavour.

Shiitake mushrooms can be eaten raw but are often cooked first to add flavor to the dish or to make them more tender.

These fungi are not just found in Asian dishes. They’re also a big part of some tasty Italian dishes. For example, they can be used to make sauces for pasta or as the main attraction on an antipasti platter with cheese and olives.

Portobello mushrooms have a meaty texture and can be eaten raw or cooked. They are large in size and have a meaty flavour that can easily replace animal protein in many dishes. So next time you’re cooking up pasta for your family, swap out minced beef with these mighty mushrooms!

Oyster mushrooms are best for use in soups, sauces, and salads. They are a delicately sweet and affordable mushroom, perfect for any dish. Oysters are called this because of their delicate flavour and appearance, similar to that of an oyster shell.

The mushrooms will also have tones of red or brown colours when they’re younger, making them even more appealing.

Enoki mushrooms have long stems with small caps on the end that taste like an asparagus stalk. Enoki mushrooms can be sautéd with some garlic and soy sauce, or even used in a stir-fry.

Although enoki mushrooms are found growing on trees, you can still grow them indoors. They’re very easy to maintain, and they don’t like direct sunlight.

Chanterelle mushrooms have a fruity flavour and grow in clusters. They are a delicacy found in the forests of eastern North America and Asia. They have a wonderful, unique flavour and are often used for pizza toppings or as an ingredient in dishes like risotto. They have a dense texture when cooked and can be used in many dishes such as soups, sauces or pasta.

Cremini mushrooms are versatile and can be used in both savoury dishes or desserts!

The word porcini is Italian for piglet. The name was coined because the mushrooms are so similar in colour to a small, cute piglet.

Porcini mushrooms grow wild on birch and beech trees in Europe and North America. They can also grow on other types of trees with bark, including pine and oak tree trunks. They have a rich, earthy taste that pairs well with meat and vegetables.

Porcini mushrooms are a great addition to any dish – they’re delicious in pasta dishes, risotto, salads and soups.
The most popular porcini mushroom recipe is the classic porcini mushroom risotto made with Arborio rice and white wine. This dish will make you feel like you’ve been transported to Italy!

Chestnut mushrooms are a unique and flavourful mushroom. They have an earthy, nutty flavour that pairs well with rich dishes like beef stew or risotto. They have a rich, earthy flavour with hints of vanilla. Chestnut Mushrooms are available year-round and are harvested at their optimum size for cooking or eating raw.

Can You Eat Mushrooms Raw?

Mushrooms are a great addition to a variety of dishes, but can you eat mushrooms raw? The answer is yes! Raw mushrooms can be eaten as an appetiser or used in salads and soups. Before eating them raw, it’s important to make sure that they’re clean, fresh, and free from dirt.

How To Cook Mushrooms

Mushrooms don’t take well to high heats and have a tendency to get soggy in the pan if you over-cook them. You can cook mushrooms by frying them with olive oil or butter until they’re browned before adding the vegetables of your choice. You can also sautee them for about 3-5 minutes on medium heat or roast them for 20 minutes at 200C. 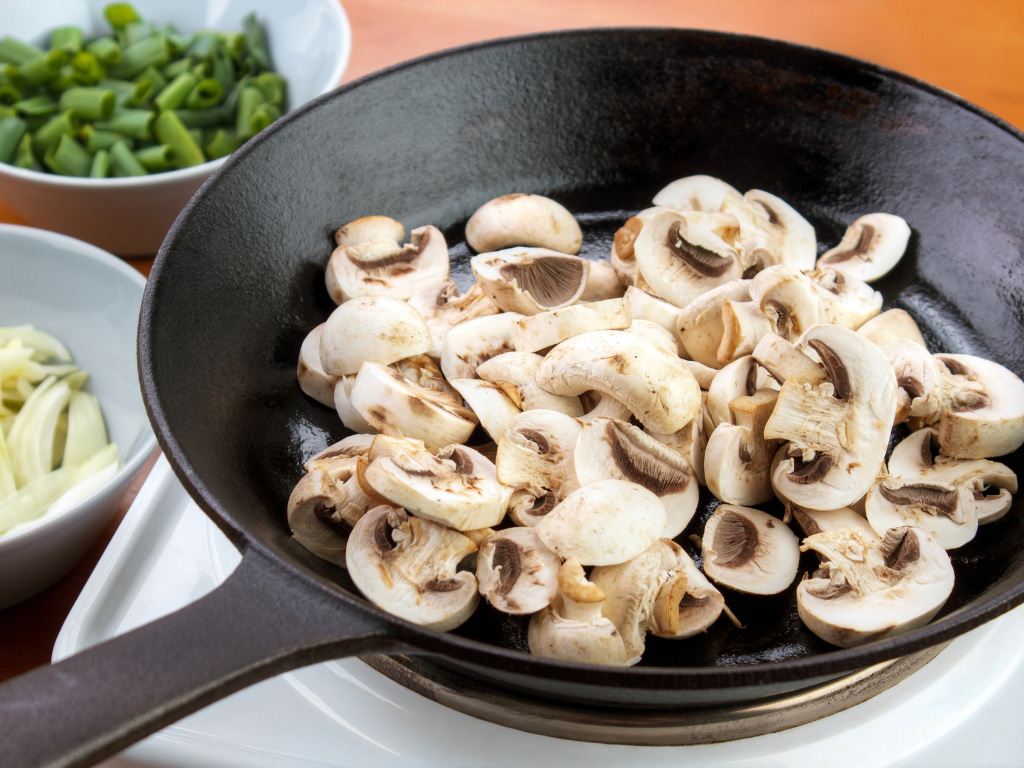 Can You Freeze Mushrooms?

Yes you can freeze mushrooms, but there are some important things to keep in mind. Mushrooms contain a lot of water, so they will start to become soggy when they’re frozen. That means if you want them to have a texture like fresh mushrooms, then you need to blanch them first and dry them well before freezing.
– If you’re going for the best quality after thawing, it’s best to use a vacuum sealer or heavy-duty freezer bags with as much air removed from the bag as possible.
– To prevent freezer burn, store your frozen mushrooms at least 3 inches (8 cm) away from any other food or packaging material.
– Mushrooms can be frozen for up to 12 months.
– You can add these mushrooms to any dish that will be thoroughly cooked (like casseroles).
– Alternatively, if you want the mushrooms on the softer side, let them thaw in the fridge until they are soft enough for use.

What Type Of Mushroom Should You Use For Your Recipe?

– Shiitake mushrooms are great for Asian recipes because they have a meaty texture and flavour.
– Portobello mushrooms make an excellent vegetarian option because they’re large enough to fill sandwiches or burgers while retaining their “meaty” texture.
– Cremini mushrooms are another good choice if you want something hearty but not too strong in taste – perfect with some garlic and butter or as the base for

*according to the Woodland Trust https://www.woodlandtrust.org.uk/blog/2017/08/types-of-mushroom/