Home » Blog » How To Ripen Tomatoes At Home – 5 Easy Methods

When it comes to tomatoes, nothing beats red, ripe and juicy ones.  Whether they’ve been picked from the garden, or bought fresh from the shops, tomatoes are a staple in vegetable salads and scrumptious bruschetta.  You simply can’t do without them.

But what if the ones you have at home aren’t quite ready yet?

Maybe you picked them a little too early from the vine, or bought them still-green at the store.  How do you get them sweet and tasty in no time?

How To Ripen Tomatoes At Home 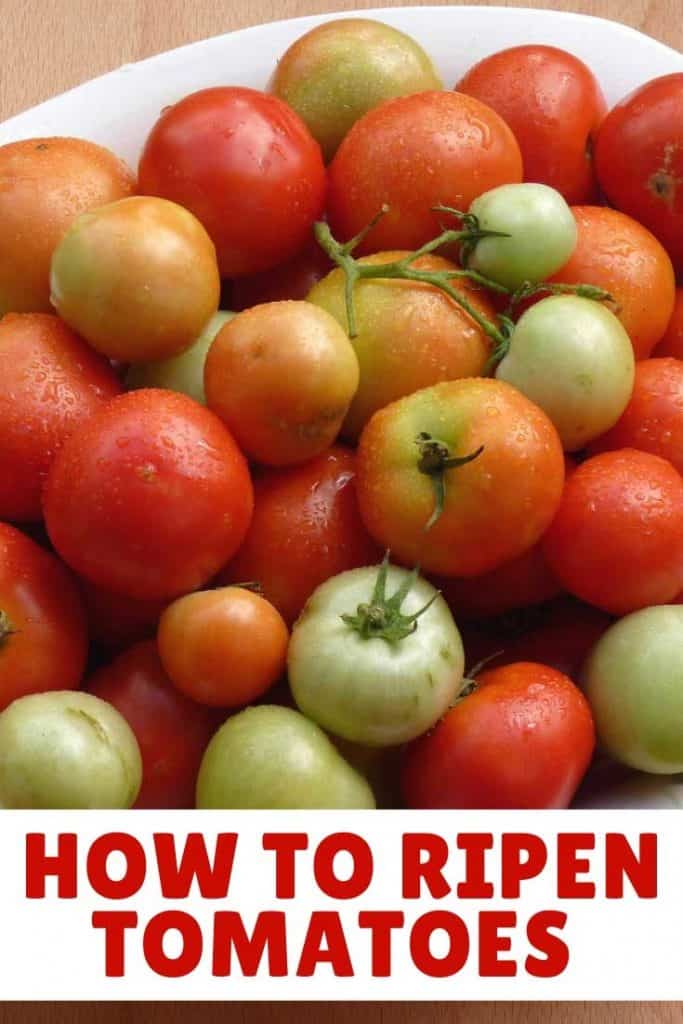 First, it helps to know exactly what causes tomatoes to ripen.  One factor is variety.  Smaller fruits reach their maturity stage faster than large ones.  So expect cherry tomatoes to ripen more quickly than the big beefsteak variety.

Another is temperature.  The warmer the environment is, the faster a tomato ripens.  Temperatures between 10 and 30 degrees Celsius will cause them to produce lycopene and carotene, the two substances that make them turn red.  Any environment cooler than 10 degrees will make tomatoes mushy.  An even cooler temperature will halt the ripening process completely.  So never put green tomatoes inside your fridge.

Still, whatever less-than-ripe stage your tomatoes are in – whether green and firm, or starting to turn orange and soft at the bottom – there are several ways to get them to ripen fully.  Here are five.

Place them in the window sill in mild sun.

I place emphasis on mild because heat causes fruits to ripen very quickly, and leaving your tomatoes in the hot sun can compromise them in two ways:  it toughens their skin and puts them at risk of rotting.

Be sure to sun your tomatoes only if they’re still green and far from ripening, and if it isn’t the peak of summer.

And never leave them on the window sill if you’ll be away for several days and can’t check on their progress.

If you do decide to sun them in a window sill or a kitchen counter, place them stem-side down to keep them from rolling.  And allow space in between each one to provide ventilation.

Just like ripening bananas, you can put them in a bag.  If there’s only a handful of tomatoes that you need to ripen fast, place them inside a paper bag.  A plastic bag with holes punched through them would do just as well.

The objective is to capture their ethylene, a plant hormone that fruits release in gas form when they reach their mature green stage.  Ethylene causes fruits’ cells to break down, making their skin and flesh turn softer and sweeter.  It’s also responsible for the fruits’ bright colours and aromatic scent.

Keeping your unripe tomatoes contained in an environment where there’s plenty of ethylene will hasten their ripening.  That’s why under-ripe tomatoes, or any fruit for that matter, ripen more quickly when they’re around riper ones.

But the key is placing them in a breathable container, since fruits give off moisture and you don’t want to trap excess humidity inside the container, potentially causing moulds.

If you have a banana, avocado or an apple on hand, place it inside the bag to speed up the process.  These fruits have high levels of ethylene and will speed up the ripening.

Check the bag every day to see if your tomatoes are ready.  You’ll notice that the smaller ones ripen more quickly.  As soon as they becomes 50-75% red, remove them from the bag and place them on the kitchen counter where you can see them easily.  Even better, put them in your fruit bowl where they can ripen along with your other fruits.

Harvest and store the greens in a cardboard box. If you grow tomatoes in your own garden, leave them on the vine as long as you can to ripen fully, weather permitting.  But if it’s already late in the autumn and you need to harvest them before the winter frost comes, by all means do so.  You can easily ripen them indoors.

First, make sure the freshly picked fruits are free from dirt and all leaves and stems have been removed.  Then, wrap them in paper to keep from touching each other and prevent decay.  Too much ethylene can ripen tomatoes too quickly, and if you’re unable to catch a fully ripened one in time, it can start degrading and affecting the others.  As the saying goes, one bad apple can spoil the whole box.

You can use paper bags as wrappers.  Old newspaper will do as well, but they have ink which contains harmful chemicals.  If you choose to use newspaper, be sure to wash the fruits very well before consuming them.

Once wrapped, place your tomatoes in cardboard boxes.  Used food produce boxes from the supermarket work best because they’re wide and shallow.

If possible, arrange them only in a single layer to avoid bruising and crushing.    If you must have a second layer, take care to position the bigger, harder ones at the bottom, first.

Depending on how soon you want your tomatoes ready, store the boxes in a dry place with temperatures between 10 and 20 degrees C.  If you want them ripening in a couple of weeks, place the box in a moderately warm area, around 16 to 20 degrees.

Again, adding a banana or apple would help.  If you want to delay the process so they won’t be ready until after three weeks, keep them in a dark, cool space such as a cellar, basement or pantry with temperatures are between 10 to 15 degrees.  They’ll take about a month to fully ripen in this range.

If you live in a humid region, though, you may need to use a dehumidifier to prevent moulds that cause spoilage.

Remember to check every few days for signs of ripeness, bruising or mould growth.

Alternatively, you can pull up the entire plant/s, roots, stems and all, and hang them upside down in an area protected from the cold – such as your garage.  Tomatoes taste better when left ripening on the vine.  First, remember to shake off all dirt and debris.

If your plants are potted, just move the pots indoors, safe from the frost.  Then place them by the window where it’s sunny and warm so they can keep producing lycopene and carotene.

Once your tomatoes are fully ripe, consume them within a day or two.  Otherwise, store the surplus in the fridge – although doing so might sacrifice their flavour a bit.  The best thing to do would be to turn them into soups, sauces, or sun-dried tomatoes.

You may also freeze your ripened, raw tomatoes for cooking later.