Home » Blog » How To Use A Slow Cooker

Are you wondering how to use a slow cooker?

Whether you already own a slow cooker, or you are thinking about buying one, you likely have lots of questions on how to make the most out of this versatile appliance.

Don’t be like me – it stayed unloved in the back of a kitchen cupboard for years before I finally integrated it into my cooking routine!

The good news is, a slow cooker is easy to use. Once you understand some of the basics and have used it a few times, you’ll wonder how you ever cooked without it. 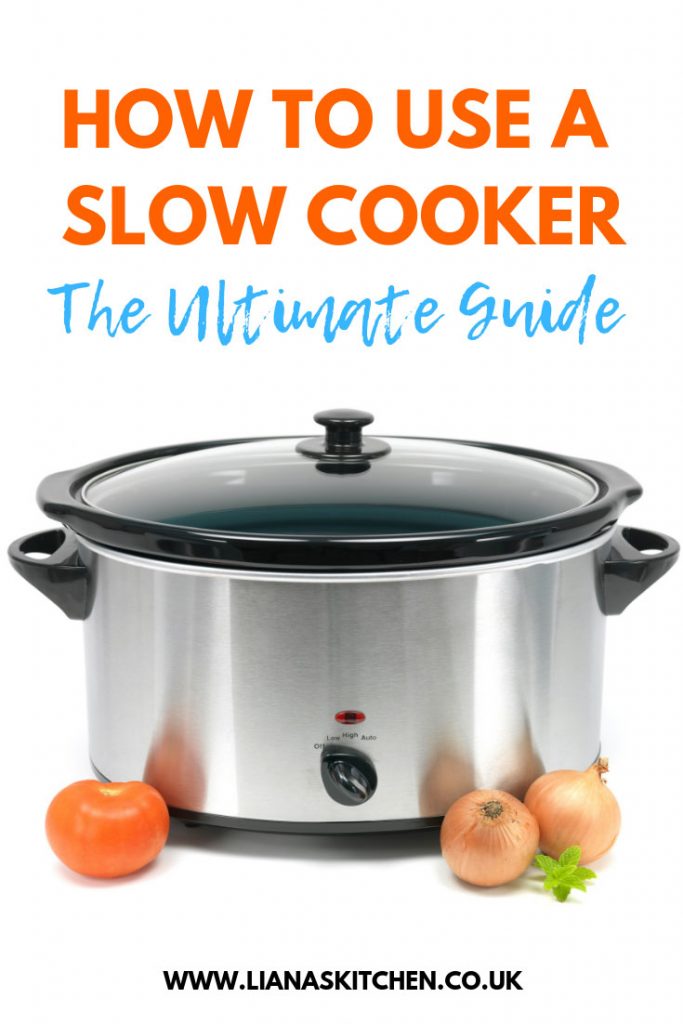 I get quite a few questions about using a slow cooker, from friends, and here on the blog.

In fact, once upon a time, I had a load of my own!

So, if you have any questions, no matter how silly they may seem, please do go ahead and ask! You can contact me via the comments below.

1. How Do I Cook Vegetables In A Slow Cooker?

Vegetables can be cooked in a slow cooker but to ensure that they come out evenly cooked cut them into small chunks.

Vegetables will often take as long to cook as meat does in the slow cooker. Cut them up so that they are smaller in size than the meat and place them on the bottom of the slow cooker.

If possible, don’t add green vegetables until the last 20 to 30 minutes of the cooking time. This will help them to retain their crunch and vibrant green colour.

You can use small frozen vegetables such as peas and sweetcorn in a slow cooker. Add them in for the last 30 minutes.

The liquid doesn’t boil away in a slow cooker as it does in a pot.

The liquid that is released whilst cooking will remain in the slow cooker – this is very handy for making gravies as well as ensuring your food doesn’t dry out. Sometimes when I’m in a hurry I only put a joint of meat in my slow cooker, pop it on low and leave it to do its stuff – I put no liquid at all in it.

Your food shouldn’t burn or boil dry. The food is cooking so slowly that is can be left for a long period of time.

4. What Is The Best Meat To Use In A Slow Cooker?

A slow cooker really lends itself to all kinds of stews and casseroles. Even the toughest of meats will come out succulent and tender after they have been left to gently slow cook throughout the day.

Some meats will literally fall apart as you remove it from the pot. What makes cooking by slow cooker such an economical option are that the cheapest meats are the best kind to use!

There’s little point in using expensive cuts like sirloin steak or pork fillet, they will come out lovely and soft but will lack the flavour of the tougher meats such as brisket, knuckle, shank and chuck steak.

Whole joints of meat also work really well for Sunday Roasts. For more details on cooking meat in a slow cooker scroll further down where I talk about it some more.

A slow cooker is ideal for all kinds of lifestyles. Whether you are a large family, or you live alone, there is a slow cooker for you.

The meals created not only taste great, but they are also simple to prepare and a fantastic time saver.

5. What Size Slow Cooker Should I Buy?

Most manufacturers will advise in the product description what the capacity and recommended servings is. As a rough rule;

These tend to be the 3 standard sizes of slow cookers, but some manufacturer’s make the capacity in different sizes. Check our Best Slow Cooker Guide for further details on our recommended models.

6. Is A Slow Cooker Expensive To Run?

I thought it would cost a lot as it is running for so long. However, after a quick search, it would seem that they use around the same amount of electricity as an electric light bulb.

7. Do I Need To Heat It Before Putting Any Ingredients In?

I never preheat mine, I just put my ingredients straight in. Do check with the user guide for your model though and see what the manufacturer recommends.

8. What Setting Should I Use?

Most slow cookers have 3 settings (high, medium and low) and all have at least 2 (high and low).   Usually, the high setting will cook twice as fast as the low setting. If you need to convert a slow cooker recipe from one setting to another use this conversion table from Morphy Richards.

9. Can I Lift The Lid During Cooking?

The temptation is high to have a sneaky peek at how the recipe is getting along, give it a quick stir, and maybe a finger dip taste. Try to resist the temptation as lifting the lid during cooking, even for a short while, will allow heat to escape and mean you have to add an extra 15 to 20 minutes to the cooking time.

10. Do I Need To Chop Meat Up Before Putting It In?

11. Do I Need To Sear Meat Before Putting It In The Slow Cooker?

It really comes down to personal choice whether you sear your meat first. If you don’t have the time (or the inclination!) then you can place it straight in.

The meats I always like to brown off first are sausages when making a sausage casserole in a slow cooker, and meatballs.

Morphy Richards do a great Sear and Stew model that allows you to brown the meat in the slow cooker pot on top of the hob without needing to use a different pan.

Yes, it is. I really worried the first time I left it on and left the house. Thoughts of returning home to a burning house worried me for most of the day! But slow cookers are perfectly safe and are designed to be left on for long periods of time. If it helps ease your mind, when you first use the slow cooker, do it on a day when you are going to be home.

13. Can I Use Frozen Ingredients In My Slow Cooker?

No, it’s not recommended and not something I would like to risk. As the heat in a slow cooker doesn’t get evenly distributed it might not efficiently heat the ingredients to the necessary temperature.

14. Can I Fill The Slow Cooker Pot All The Way To The Top?

No, you shouldn’t. You need to allow room at the top. Don’t fill more than two-thirds full.

15. What Order Should I Put The Ingredients In?

Vegetables usually take longer to cook than meat so place these in first at the bottom and lay the meat pieces on top.

You certainly can, but don’t add fresh herbs until the end or they will lose a lot of their taste. Ground and dried herbs and spices can be added at the start.

17. Can I Bake Things In My Slow Cooker?

Yes, you can! You can cook cookies, brownies, sponges and many different desserts.

18. Can I Adapt A Conventional Recipe And Make It In A Slow Cooker?

Yes, most recipes can be successfully adapted. As slow cookers retain liquid, you will need to reduce the amount of liquid, at least by half. Food52.com recommends for every hour a recipe needs to be cooked at 350F (180C/Gas Mark 4) it will require 6 to 8 hours on low or 4 to 6 hours on high.

19. Are There Any Ingredients I Shouldn’t Include In The Slow Cooker?

As mentioned above all foods must be thoroughly defrosted. Some foods aren’t suitable for cooking for long periods of time, cream and seafood can be added towards the end of the cooking time if required.

Yes, you can put pasta or rice in a slow cooker – how long you cook it for will depend on the recipe you are making.

If you are making meals such as slow cooker lasagne, you can add the pasta sheets in at the beginning of the cooking time and they will cook through perfectly and not be at all mushy.

If you are making rice in the slow cooker, use easy cook rice rather than any other type of rice – it has less starch in it and will be less likely to go sticky.

21. Can You Reheat Food In A Slow Cooker?

No, it’s not recommended. Only raw food should be put in a slow cooker. If you need to reheat food either do so in the oven, in a saucepan on the hob, or in a microwave.

It’s important to make sure that meat (especially chicken) is cooked. The most accurate method is to use a meat thermometer. If you don’t have one, pierce the meat with a sharp knife and check if the juices run clear.