It’s useful to rotate a range of different cooking methods to ensure that your diet remains varied and enjoyable!

In this article I’m going to run through some of the most popular ways to cook food, together with some of the terminology used! 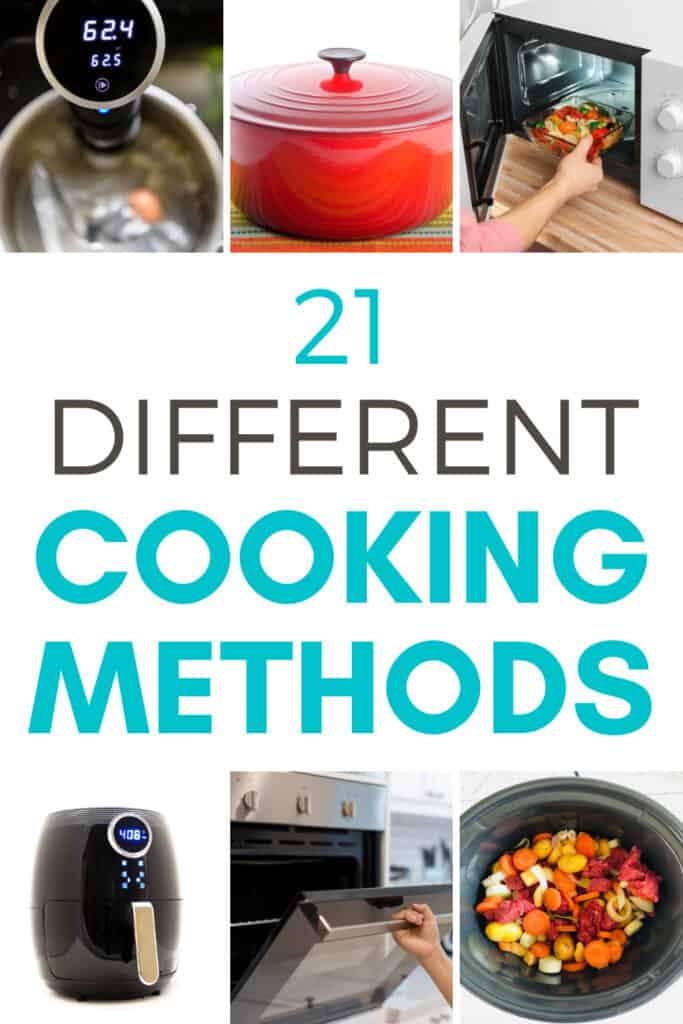 Air frying is a relatively new method of cooking, with air fryers bursting on to the cooking scene around 2010. Some of the original kitchen appliance companies include Philips and Tefal.

Basic air fryers essentially work by circulating hot air around the machine to cook the food. Temperature settings range from 160C to 200C and cooking time is typically reduced by around 20 to 30%, but this will vary between different models. 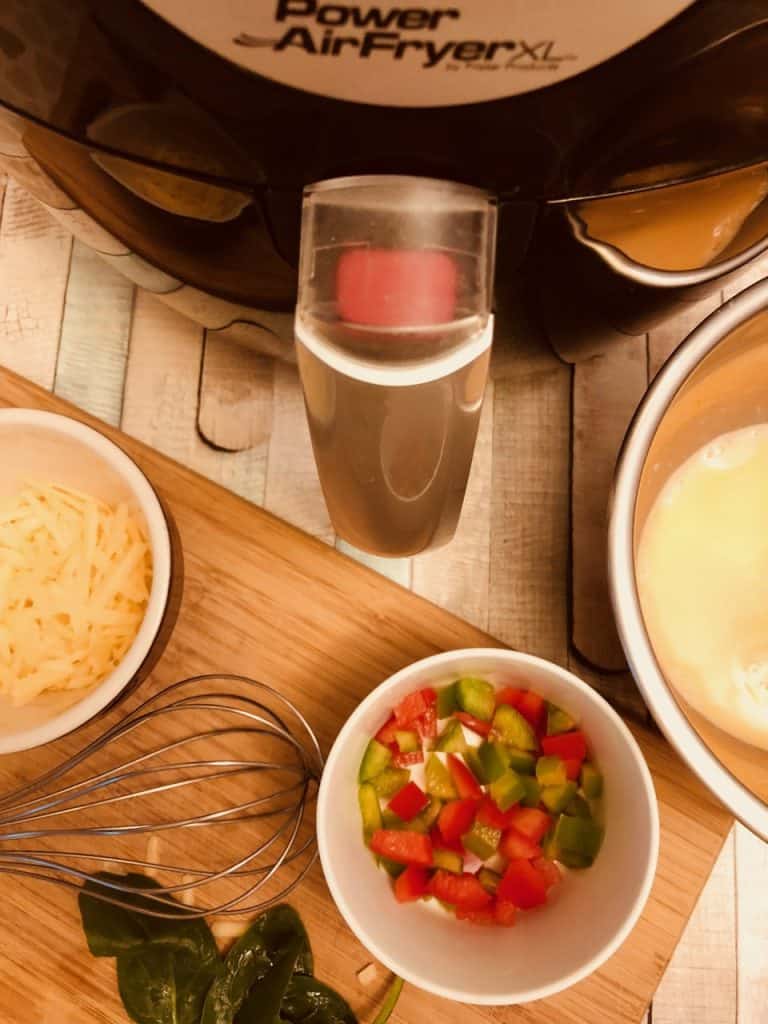 Aside from the quicker cooking times, air frying also reduces the need to use as much oil, with popular foods like air fryer chips tasting just as good when air fried as deep fried.

Although air fryers are generally marketed to ‘fry chips,’ you can actually make lots of different foods in an air fryer.

As air fryers have evolved over the last decade so have the number of features that come with some of the models. Options can include air fryers with pizza pans, skewers and cake pans. Some multi cookers now also include air fryer functions. 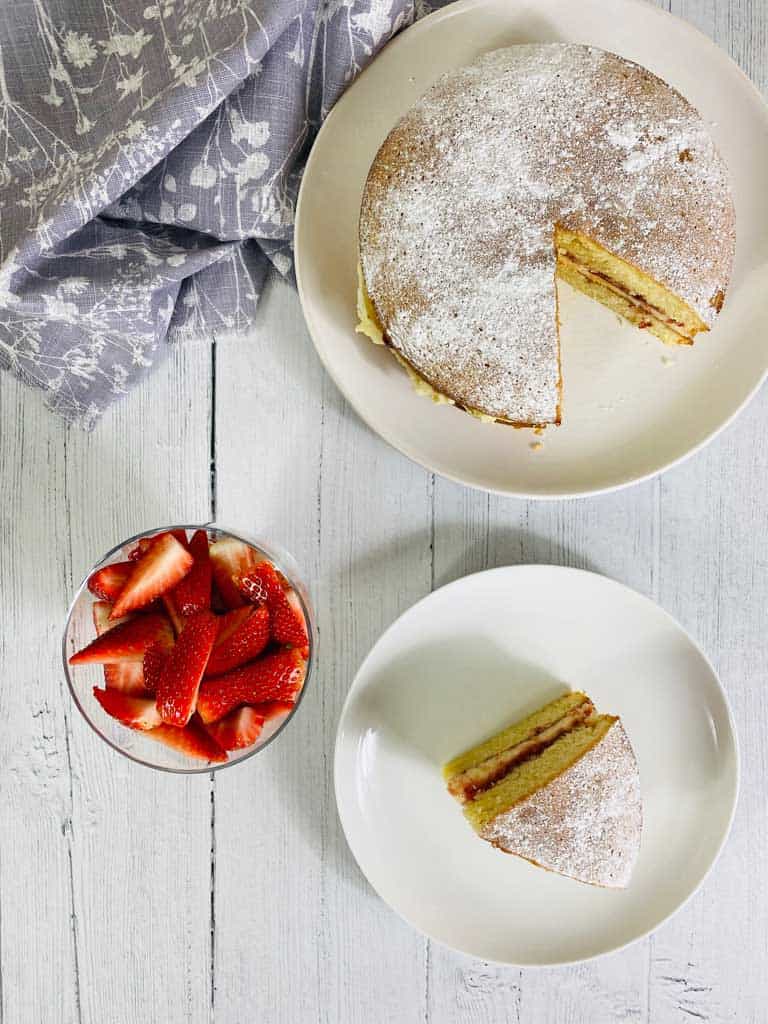 Baking can cover a wide range of recipes, including breads, cookies and cakes. Baking goods usually include flour, or an ingredient that is a type of grain.

Baking is probably one of the oldest cooking methods, as well as one of the most common. A dry heat is used in baking, usually in an oven.

However, you can also include recipes such as pasta bakes, lasagnes and baked potatoes under the baking category, even though they don’t usually involve flour, eggs or sugar, they are cooked in an oven.

Baking is similar to roasting, but there is a difference. Whereas they both use dry heat to cook the food, there are a few differences;

When the suns out (or in many cases not!) we love to dig out the BBQ and dash to the shops to buy up any burgers and sausages we can get our hands on.

Barbequing, as we know it, is the cooking of food outside on a barbecue, either by grilling, smoking or roasting.

The actual barbecue itself is either a purpose built appliance, either run on gas or coal, or a home built brick BBQ. Gas barbecues come in all shapes and sizes and vary wildly in price.

Whatever barbeque you use, one thing is for sure – it’s the perfect opportunity to enjoy a social gathering where food is the focus!

Blanching is more of a food preparation step rather than a complete cooking method.

The reason for blanching an ingredient include to soften it, to prepare it for freezing, and to make it easier to peel (commonly used when preparing tomatoes for cooking).

Foods that are usually blanched include tomatoes, almonds and runner beans, as well as other fruits and vegetables. 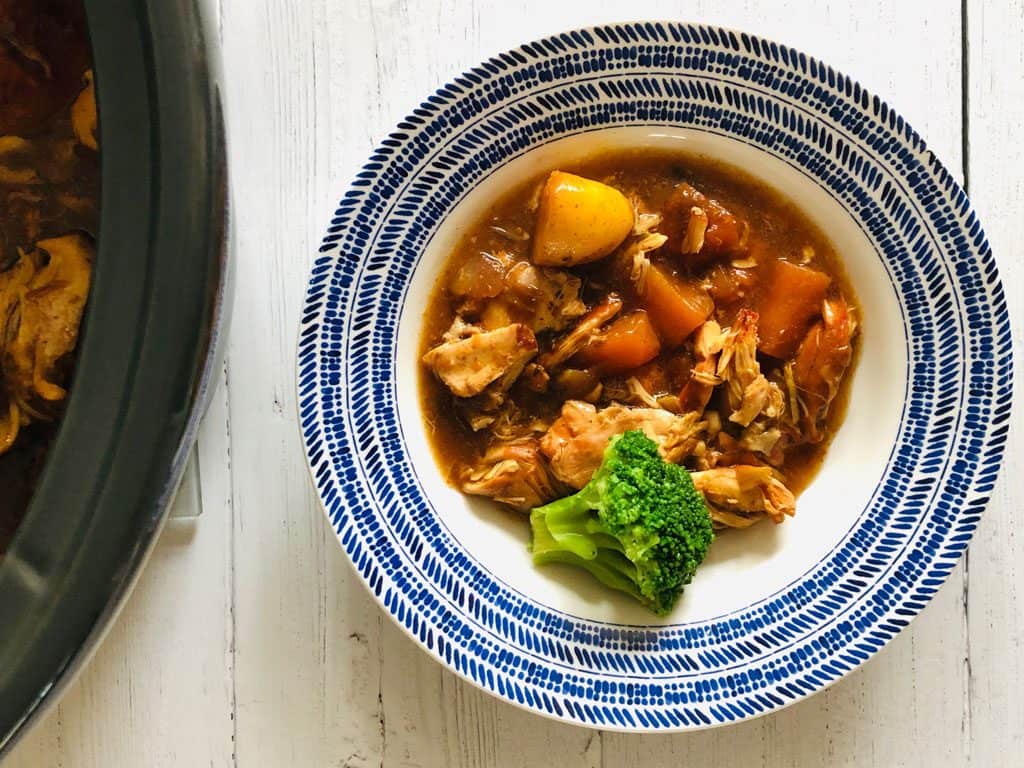 Casseroles and stews are a very practical way to cook a meal as they can be prepared ahead of time and left unattended for long lengths of time while they cook. The slow cooking time means that cheaper more economical cuts of meat can be used as they will become tenderised and soft during the cook time.

Popular casseroles and stews often include winter stews such as beef, chicken and lamb casseroles with lots of root vegetables and rich stocks added in.

Deep frying is a popular method for cooking foods such as chips, doughnuts, and foods typically coated in batter such as onion rings and fish. The ingredients are immersed in hot oil and cook very quickly.

Although deep frying really does enhance the flavour of foods (I’m looking at you doughnuts), it’s a cooking method that should be used in moderation owing to the high calorie and fat levels involved.

When deep frying at home use a deep pan filled with oil, or a purpose built deep fat fryer.

Dehydrating dates back to early civilisations as a method for preserving and extending the life of food by removing the moisture and inhibit the growth of bacteria.

There are different ways to dehydrate food; electric dehydrators, oven dehydrating and air dehydrating. I’ve been particularly excited to use the dehydrator function in my Ninja Foodi and I have been very pleased with the results!

Dutch ovens are particularly versatile cooking pots with the ability to cook a variety of different meal types at varying temperatures.

Dutch ovens are heavy and are usually made from cast iron. They are certainly not new and have been in use for many years around the world. They can be used on a stovetop as well as in an oven.

The range of recipes that can be made in a Dutch oven is huge, they include; soups, stews, casseroles, roasting, frying (including deep frying) and baking bread.

Fondues originated in Switzerland as a method to prevent the waste of bread and cheese during the winter period.

Traditionally fondue is a social way of enjoying melted cheese – usually Emmental and Gruyère – by dipping in chunks of bread.

But fondue isn’t restricted to melted cheese – you’ve likely enjoyed a chocolate fondue with some fruit or marshmallows dipped in.

You can also enjoy meat fondues by dipping raw meat chunks into hot oil and cooking it before dipping it into a sauce or dip.

A method to cook certain foods in a shallow pan, called a frying pan, in a little bit of oil. Foods that are typically fried include bacon, eggs, pancakes, onions, sausages, eggy bread and omelettes. Frying is a quick and tasty way to cook foods – but keep an eye on how much oil you cook with!

Grilling is commonly used for cooking meats, vegetables and some fish. The food is placed on a metal grate that tends to be placed over a baking tray. Most ovens come with a grill included as standard.

When food is grilled the fat usually drips down through the grill and into the tray below making it a healthier method.

Microwaves are subject to mixed opinions – many kitchens include a microwave owing to the convenience they offer for cooking foods quickly, as well as reheating and defrosting ingredients.

Microwave food is cooked by electromagnetic waves that make the liquid molecules in the food vibrate and create heat.

There are different types of microwaves including appliances with grills and convection functions.

Microwaves are great for speed cooking, particularly for vegetables as the quick cook time helps to retain their nutrients and texture.

Poaching involves cooking food in a hot liquid, usually water, stock or milk. Poaching is most commonly used when cooking eggs and fish, as well as some fruits  – although fruits are usually poached in wine, sugared water or any sweet liquid.

Related: How To Make Poached Eggs

Pizza ovens have grown in popularity in recent years as people try to increase their al fresco eating options. Pizza ovens are powered by gas, charcoal or wood and come in various different sizes, as well as price tags. 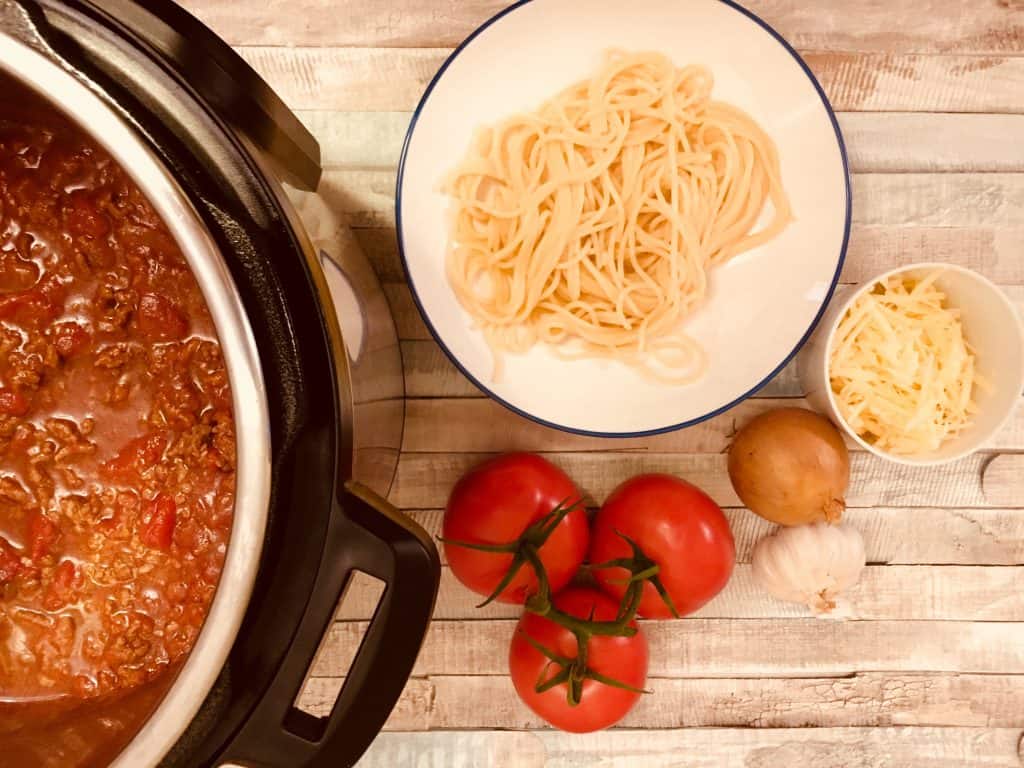 Pressure cooking has seen a return to popularity in recent years from it’s hay day of the 70s and 80s. But the pressure cookers of today tend to be electric and usually included in a multi cooker that offers many different cooking methods.

A pressure cooker works by cooking food within a high pressured steam environment, with cooking times being much quicker than other methods. Pressure cookers are typically used for cooking beans, pulses, stews, casseroles as well as rice and whole meat joints.

The raclette grill is another popular cooking style that originated in Switzerland and makes for a great way to enjoy food at a dinner party.

A raclette grill consists of a cooking surface, usually made from ceramic stone, where guests can cook their own food to their liking. Ideas to cook include meat, fish and vegetables. Underneath the stone surface there are spaces to place foods such as bread and potatoes covered in cheese which will melt whilst the other food is cooking up above. 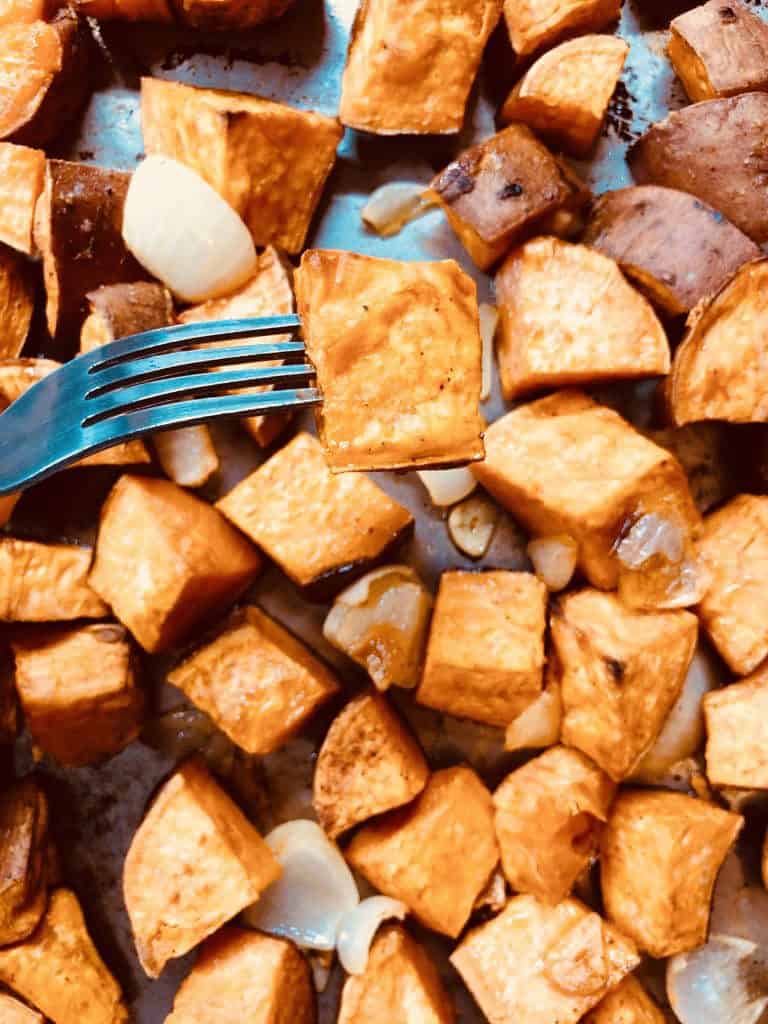 Roasting is a popular cooking method – as a nation we can probably all relate to a Sunday Roast Dinner – all those incredibly delicious roast potatoes and parsnips!

Roasting usually involves coating the meat in some oil before putting it in the oven. 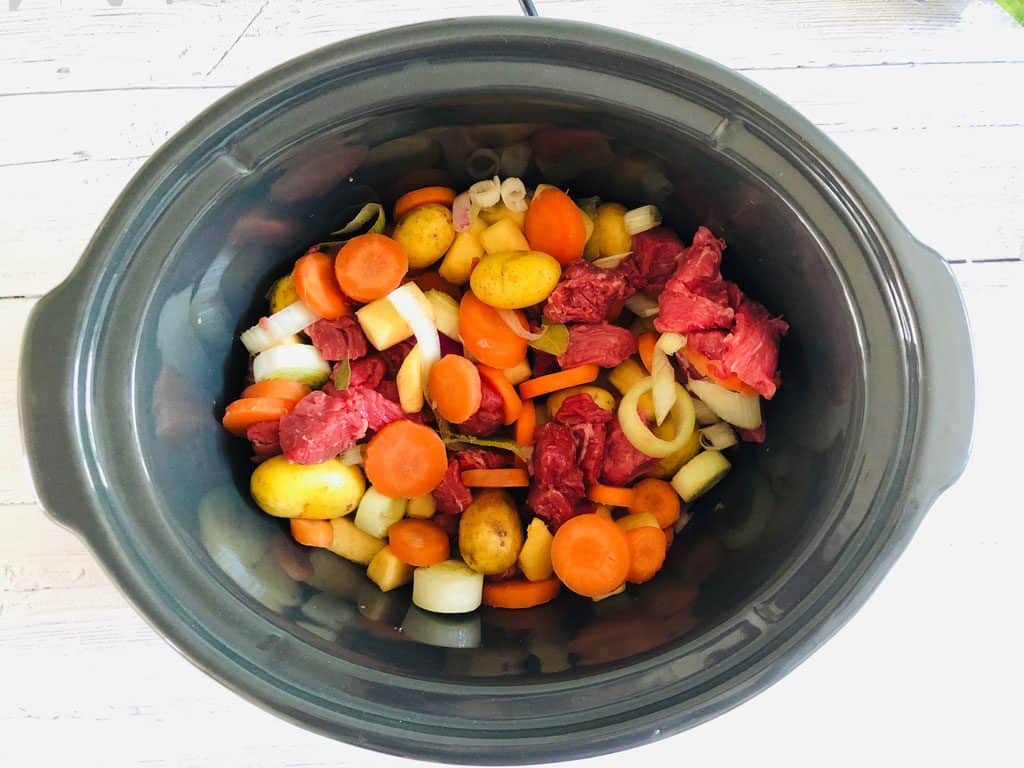 Slow cooking is an incredibly popular method for making a wide variety of recipes. One of the many positives of using a slow cooker is the ability to prepare a meal at the beginning of the day and then come home to the amazing smell of your cooked dinner!

Slow cooking is often associated with stews and casseroles, but slow cookers can be used for a wide range of recipes, making it a very versatile kitchen appliance.

Sous Vide (pronounced sue-veed) sounds like an exclusive cooking method that you would only stumble across in a top restaurant. Once upon a time this would have been true as it was once primarily used by professional chefs.

But what is sous vide? Essentially it is when food is sealed in a vacuum sealed bag and then cooked in temperature controlled water.

Popular foods that are cooked using a sous vide machine include steak, fish, chicken and pork.

Stir-frying is one the quickest methods of cooking. Stir fries are a Chinese cooking method and usually involve ingredients cut into similar sizes, including meat, noodles, vegetables and spices cooked in an oil, and often have a sauce added to them.

Typical stir fry recipes include stir fry beef, pork, chicken, noodles and fish which are cooked in a hot wok.

When steaming, the ingredients don’t usually physically touch the water, but are cooked in the steam of the hot water. Typically vegetables and fish are cooked in this way and steaming them helps to retain their nutrients, flavour and juices.

Vegetables and fish aren’t the only foods you can steam – puddings such as spotted dick and Christmas pudding are often steamed.

You can buy electric steamers, pans or collapsible baskets.